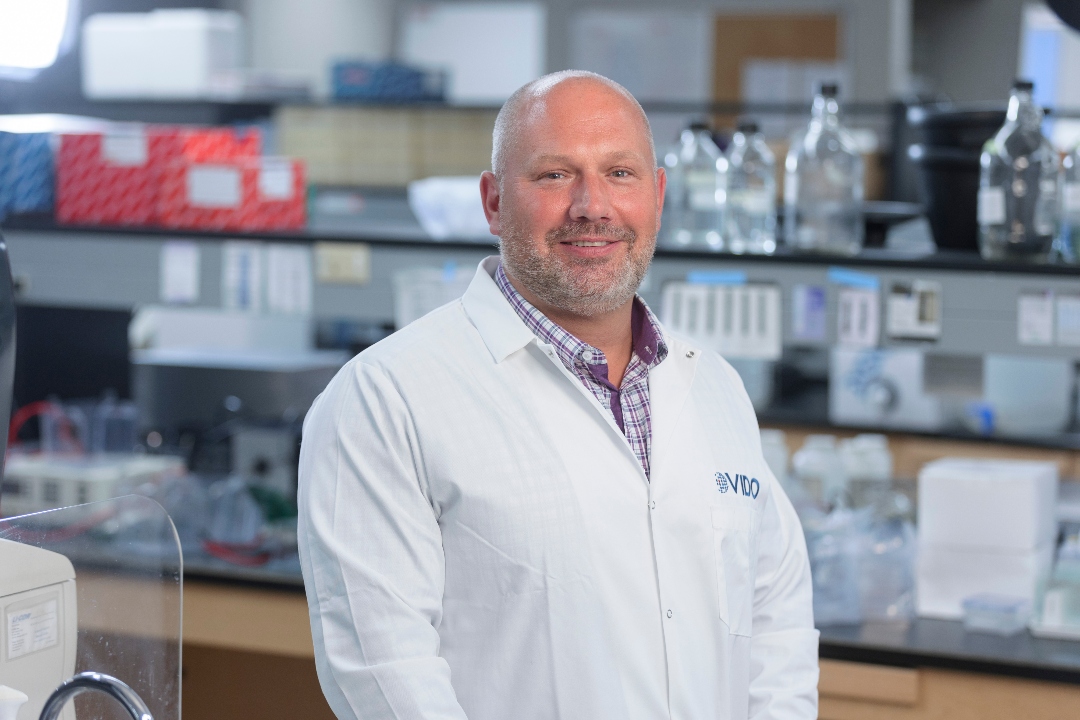 “But that’s what I love about it — it’s so interesting and so important,” said Napper, a scientist with the Vaccine and Infectious Disease Organization (VIDO) at the University of Saskatchewan (USask).

Napper is leading the search for vaccines to treat diseases caused by misfolded proteins. His original research focused on prion diseases, including mad cow disease, sheep scrapie, and chronic wasting disease (CWD) in deer and elk.

However, several similar neurodegenerative diseases in humans are also on his radar, including Alzheimer’s, Huntington’s, Parkinson’s, and amyotrophic lateral sclerosis (Lou Gehrig’s disease).

“Is CWD a priority? Yes. Is Alzheimer’s the Priority? Yes. We are doing this work in parallel with both human and animal vaccines,” he said.

Napper explained that these diseases arise when a protein misfolds and takes on new and devastating properties. And once it’s misfolded, the new protein will reproduce itself.

When the wrong fold comes in contact with a correctly folded version of itself, that protein also folds wrong, “so one becomes two and two becomes four, and you get a cascade of misfolding that ends in fatal disease.”

Prion diseases first came to attention in the early 1950s with the discovery of Kuru, a neurodegenerative disease found in the Fore people of Papua New Guinea, Napper said. It was linked to funerary cannibalism – the Fore people cooked and ate their deceased relatives, thus spreading the disease.

When the cause of Kuru was identified as a proteinaceous infectious particle or prion about 20 years later, “it was mind-boggling,” Napper said. “It has completely changed the way we think about infectious diseases, because this is not a bacteria or a virus.”

This prion-like mechanism is now known to be responsible for other human neurodegenerative diseases such as Alzheimer’s disease. And the search for a cure recently got a boost.

The Alberta Conservation Association, in partnership with Alberta Environment and Parks and the Saskatchewan Department of the Environment, has provided $1.2 million to fund research into an oral vaccine to control CWD, which poses significant risk to wild populations in four counties and 28 states.

A team of scientists at four Western Canadian universities, including Napper, Dr. Philip Griebel (DVM, PhD) and Dr. Suresh Tikoo (DVM, PhD) at VIDO, as well as Dr. Sidney Hayes (PhD) in the College of Medicine, focusing on developing oral vaccines for CWD that can be released into affected habitats. The other researchers are from the Universities of British Columbia, Alberta and Calgary.

The scientists will work with wildlife groups to develop and deliver an effective real-world solution.

“We’re in lab coats and they’re in camouflage, but we can all work together,” Napper said.

On the human front, the Weston Family Foundation, through the Weston Brain Institute, is providing $1.2 million to Napper and three research colleagues at other Canadian universities to develop a vaccine against misfolded protein diseases in humans. Building on previous developments, the scientists will generate antibodies that attach to misfolded proteins — one has already been selected for preclinical development — to prevent disease development.

In both cases, Napper appreciates the team approach.

“Just as we saw with COVID when the global scientific community came together to develop a vaccine, we are better, stronger and smarter when we work together and leave our self-interest and ego at the door.”

That’s not to say the work will be easy, but the early results are very encouraging, Napper said. “The pipeline is there and once we have the target protein, we have been able to get the required types of immune responses. All the diseases we are talking about have a different target protein, but developing the vaccines all use similar processes. ”

Napper, who is also a professor of biochemistry at the USask College of Medicine, believes VIDO’s unique culture and expertise will make a significant contribution.

Founded in 1975 to focus on infectious diseases in the Canadian livestock industry, VIDO expanded its mission to include research and vaccine development related to human disease, taking COVID-19 as an example. The wide range of talent among VIDO scientists means the organization can “approach complex problems as a team,” he said.

“I’m not an immunologist, but the guy in the office next door is, and there’s a scientist who’s been developing oral vaccines for 20 years, one floor down. We all want to make the world a better place.”

Napper admitted it is faster to develop and market a vaccine for animals than it is for humans, “so it’s not unreasonable to propose a vaccine against CWD in seven to 10 years.” A human vaccine will take longer, but Napper is not deterred.

“Our first success could be to simply slow the progression of the diseases, but we will take incremental successes as they come. There is hope.”