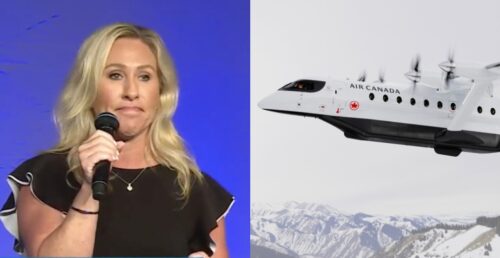 The politician, who has been the U.S. representative for Georgia’s 14th congressional district since 2021, joked that the new electric-hybrid planes could be powered like “slave ships” with passengers forced to cycle by “annoying flight attendants” on exercise bikes. . “to keep the plane in the air.”

Speaking at the Texas South Summit, she didn’t help validate her theory by incorrectly referring to Justin Trudeau as the “president” of Canada.

“Here’s something interesting — get this: Air Canada has ordered 30 electric planes; what do you think?” she asks the audience. “What does that actually look like?”

She wondered if it would work like “the slaves rowing ships,” curious if the planes would be powered “like a spider class in a tube.”

Popular TikToker @pottymouthpollyanna, who often records her reactions to political and social comments on the platform, shared her reaction to Greene’s comparison.

The lithium battery-based aircraft are expected to be commissioned in 2028. They will have an emission-free range of 200 kilometers, which can be extended to 800 kilometers if power is supplemented by a generator and fewer passengers fly.

The airline says its new ES-30s will enable it to “serve regional and commuter routes and provide low-emission connectivity to local communities in the medium to long term.”

Today we agreed to buy 30 ES-30 electric hybrid aircraft from @heartaerospacea step towards our goal of net zero emissions by 2050. These regional jets can accommodate up to 30 passengers and fly silently and with zero emissions when running on battery power.