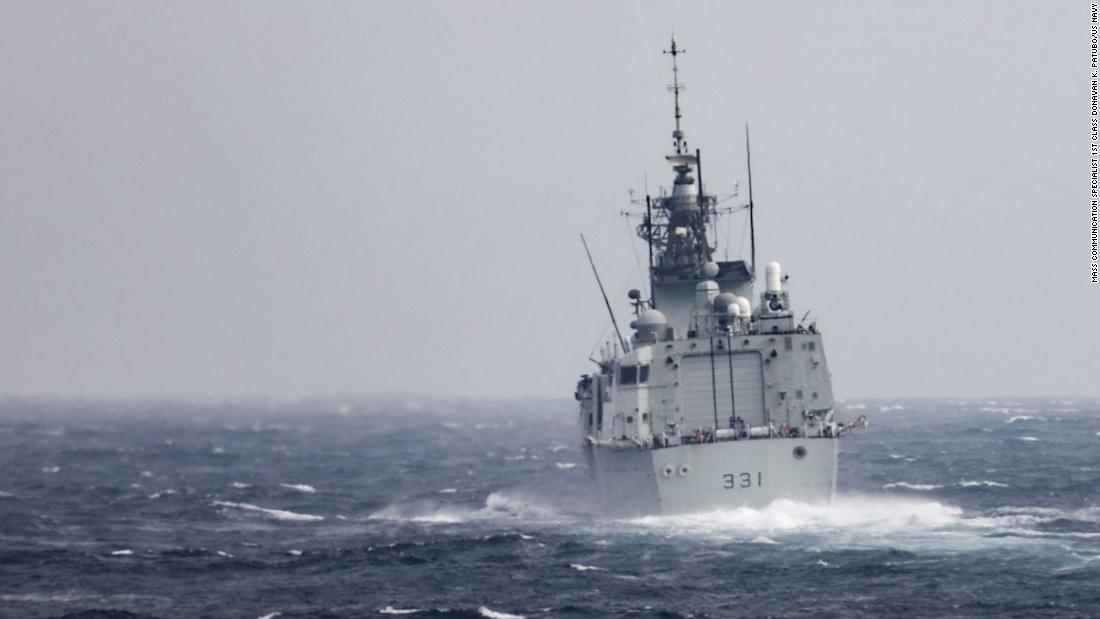 A US Navy vessel, the Arleigh Burke-class guided-missile destroyer USS Higgins, conducted a “routine crossing of the Taiwan Strait” on Tuesday, US Navy spokesman Lt. Mark Langford said in a statement.

The US vessel was conducting the transit “in conjunction with the Royal Canadian Navy’s Halifax frigate, HMCS Vancouver,” Langford said.

The two ships “passed through a corridor in the Strait that is outside the territorial sea of ​​any coastal state,” Lieutenant Langford said. The transit “demonstrates the commitment of the United States and our allies and partners to a free and open Indo-Pacific,” added Lt. Langford.

Though the US called the transit “routine,” it comes after Biden ramped up tensions between Washington and Beijing over Taiwan and told CBS’s “60 Minutes” that he would use US troops to defend the island if China tried to invade.

The strait is a 180-kilometer stretch of water that separates the democratic, self-ruled island of Taiwan from mainland China.

Beijing claims sovereignty over Taiwan — an island of 23 million people — despite the ruling Communist Party of China never checking it. Beijing also claims sovereignty, sovereign rights and jurisdiction over the waters of the Taiwan Strait under Chinese law and its interpretation of the United Nations Convention on the Law of the Sea (UNCLOS).

However, the US Navy says most of the strait is in international waters, citing a UNCLOS definition of territorial waters extending 12 nautical miles (22.2 kilometers) from a country’s coastline. The US regularly sends its warships through the strait and has made dozens of such transits in recent years.

In the CBS interview, Biden was asked if “US troops, American men and women, would defend Taiwan in the event of a Chinese invasion.”

“Yes,” replied the US president.

The comments echo a pledge to defend Taiwan that Biden has made before, though he indicated Sunday that “American men and women” would be involved in the effort.

Daniel Le Bouthillier, head of media relations for the Canadian Department of Defense, confirmed on Tuesday that Canada participated in the transit.

“After port visits in Jakarta, Indonesia and Manila, Philippines, HMCS Vancouver sailed along with the USS Higgins through the Taiwan Strait as this was the most direct navigation route. This sail was done in full compliance with international law, including on the high seas navigational rights as set forth in the UN Convention on the Law of the Sea,” Le Bouthillier told CNN.

Chinese aircraft and ships were present through “different parts” of the passage of the US and Canadian ships, the US military confirmed, but “all interactions with foreign forces during the passage were in accordance with international standards and practices and did not affect the operation,” Langford said.

Beijing was quick to condemn Biden’s comments and reiterated its warning that China reserves the “option to take all necessary measures” to defend its territorial integrity and sovereignty.

“The US comments seriously violate the One China principle and the terms of the three joint US-China communiqués. It is also a serious violation of the important US commitment not to support Taiwan’s independence.” , according to the Chinese Ministry of Foreign Affairs. That said spokesman Mao Ning in a briefing on Monday.

“It sent a gravely wrong signal to the separatist forces of Taiwan’s independence. China expresses its strong discontent and strong opposition and has taken serious steps on the side of the US,” Mao added.

American and Canadian warships last passed through the strait 11 months ago, when the destroyer USS Dewey and the frigate HMCS Winnipeg made the journey.

After that passage, Senior Colonel Shi Yi, spokesman for the Eastern Theater Command of the People’s Liberation Army, said in a written statement that “the US and Canada have carried out provocations of an abominable nature and created problems under cahoots that seriously affect peace and stability.” danger. across the Taiwan Strait.”

Chinese leader Xi Jinping has said “reunification” between China and Taiwan is inevitable and refused to rule out the use of force. Tensions between Beijing and Taipei are at their highest in recent decades, with the Chinese military conducting major military exercises near the island.