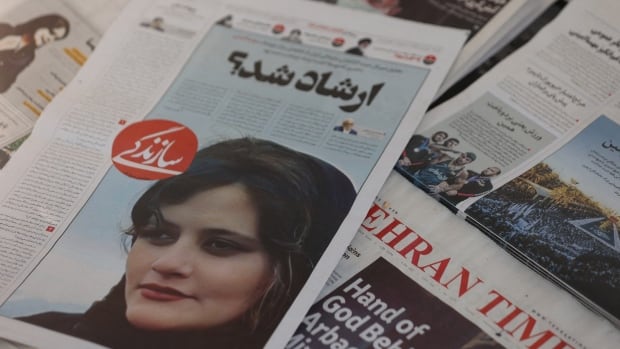 Iranian authorities say at least three people were killed across the country on Tuesday for the fourth day in a row in protests against the death of a young woman detained by police.

The death last week of 22-year-old Mahsa Amini, who was arrested by the vice squad for “inappropriate clothing” after allegedly wearing the hijab improperly, unleashed a torrent of simmering anger over a host of issues, including rights, security and a economy reeling from international sanctions.

Amini fell into a coma and died while waiting with other women detained by the vice squad, which enforces strict rules in the Islamic Republic requiring women to cover their hair and wear loose-fitting clothes in public. Her father said that Amini had no health problems and that she had bruises on her legs while in custody. He said he holds the police responsible for her death.

Demonstrations broke out in Kurdistan, where Amini was from, and spread to several other provinces in northwestern Iran on Monday and Tuesday.

Shadi Sadr, human rights lawyer and executive director of Justice for Iran joins The Rundown to discuss the UN High Commissioner for Human Rights’ calls for an independent investigation into the death of 22-year-old Mahsa Amini, who died last week after he was detained by the vice squad.

“Mahsa Amini’s tragic death and allegations of torture and ill-treatment must be promptly, impartially and effectively investigated by an independent, competent authority,” said Nada al-Nashif, the acting UN High Commissioner for Human Rights.

The UN Human Rights Office said Iran’s moral police has expanded its patrols in recent months, targeting women who are not wearing the Islamic headscarf known as hijab appropriately. Verified videos show women being punched in the face, beaten with batons and thrown into police vans for wearing the hijab too loosely.

🇮🇷#Iran: Acting UN head of human rights calls for investigation into #Mahsa_Amini‘s death in custody after her arrest for what was perceived as “inappropriate” hijab. @NadaNashif also condemns the violent response of security forces to the ensuing protests.
https://t.co/S9Yxr46Ffk pic.twitter.com/Q5pPkKCoXY

Iranian police deny mistreating Amini and say she died of a heart attack. Authorities say they are investigating the incident.

“This incident was unfortunate for us and we never want to witness such incidents,” Tehran Police Commander Hossein Rahimi said Monday.

Police released closed-circuit video footage last week that supposedly shows the moment Amini collapsed, but her family say she had no history of heart problems.

In an apparent effort to ease tensions, an aide to Iran’s Supreme Leader, Ayatollah Ali Khamenei, expressed condolences to Amini’s family and said Khamenei was affected and pained by her death.

Protests over Amini’s death have spread to other countries, including Canada, with a rally held in Toronto on Tuesday.

Foreign Minister Mélanie Joly said the Canadian government is following the protests closely. Speaking to reporters in New York on Tuesday, where she is attending the United Nations General Assembly, Joly called for “a full and complete investigation into the actions of the regime” regarding Amini’s death.

Other Western governments have claimed responsibility for Amini’s death, while Washington and a number of European countries hope to negotiate a new agreement with Iran over its nuclear program after then-President Donald Trump withdrew the US from the previous deal.

“Mahsa Amini should be alive today,” said US Secretary of State Antony Blinken. “We call on the Iranian government to end the systematic persecution of women and allow peaceful protest.”

“For Iran, human rights are inherently valuable – unlike those who see it.” [as] a tool against opponents,” he tweeted.

France condemned Amini’s arrest “and the violence that caused her death,” the foreign ministry said, calling for a transparent investigation.

Amjad Amini, her father, told an Iranian news website that witnesses saw her being pushed into a police car.

“I have requested access to” [videos] from cameras in the car and in the courtyard of the police station, but they didn’t answer,” he said. He also accused the police of not getting her to the hospital fast enough and said she could have been resuscitated.

Amini’s death could increase tension between the establishment and the Kurdish minority. After her funeral, protests broke out in Amini’s home city of Saqez in western Iran on Saturday. Police fired tear gas on Saturday and Sunday to disperse protesters.

News outlets reported that dozens of protesters have been arrested in multiple cities.

State television showed images of protests on Monday, including images of two police cars with their windows smashed. It said the protesters also set fire to two motorcycles and burned Iranian flags in Kurdish areas and in Tehran.

Minority Kurds, mostly Sunni Muslims in Shia-dominated Iran, mostly live in a mountainous region that stretches across the borders of Armenia, Iraq, Iran, Syria and Turkey. Over the years, Kurdish claims have fluctuated between full separatism and autonomy within a multi-ethnic Iranian state.