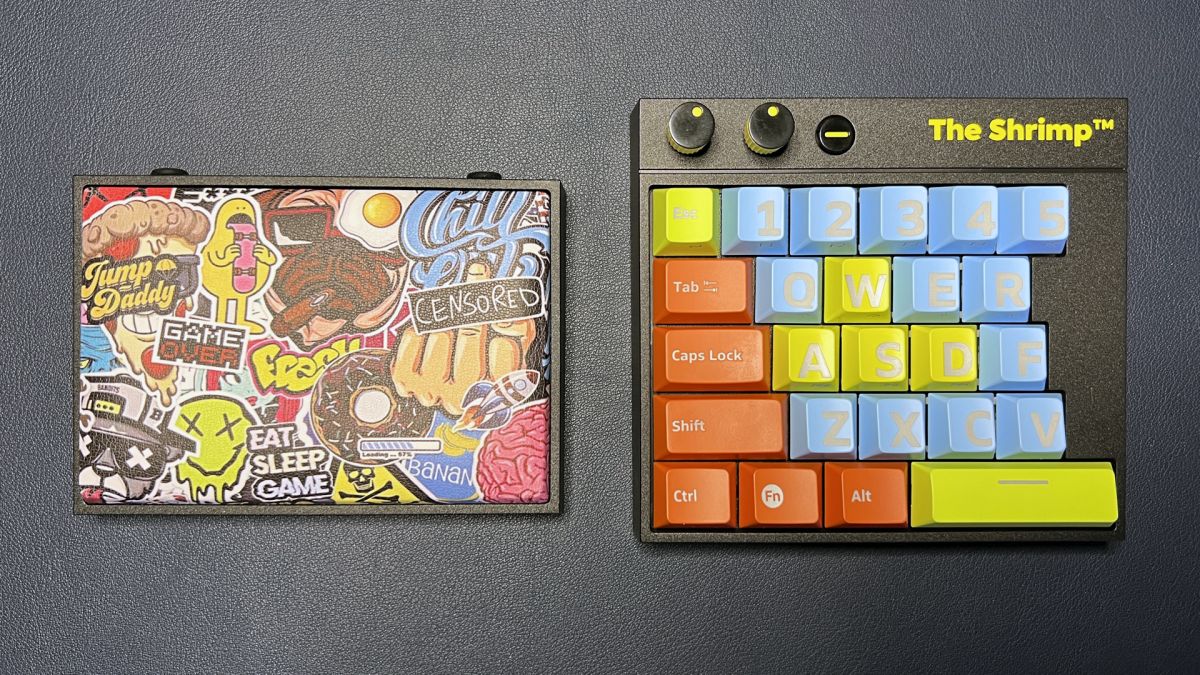 Nordic Game Supply’s mini keyboard, The Shrimp, is a bit different: it’s a 25-key macro pad arranged to look like the left side of a standard keyboard. The company calls it a 20 percent gaming keyboard, and it’s designed for gamers who want that mechanical keyboard feel in the keys that really matter: the W, A, S, D keys, and the 21 keys around it.

The Shrimp’s small footprint makes it ultra-portable, so it’s perfect for laptop users who don’t want to lug around a full mechanical keyboard (although the 60 percent keyboards are pretty small these days – you can find some on our list of best gaming keyboards). It comes with a detachable magnetic wrist pad and a detachable USB-C cable, as well as a velvet carrying case for easy travel. It is now available on Nordic Game Supply’s official site for €79.95 (about $87), but shipping is currently limited to a handful of countries – the company is working with local retailers to make it available elsewhere.

The Shrimp is a 25-key macro pad with two tactile push buttons and one media button, designed to look like the left side of a keyboard. It has ABS keycaps with translucent primary and secondary keycaps. It has a USB-C port in the center of the back and four rubber feet on the bottom. It looks and feels extremely well built and durable – well worth the price if we’re going on build quality alone.

The Shrimp comes with a padded magnetic wrist rest, a six-foot braided USB-C to USB-A cable, a plastic keycap puller, and a drawstring velor carrying case to go with it all. The carrying case has a fabric divider to separate the keyboard from the wrist rest, but given that The Shrimp is marketed at least somewhat as a travel accessory, it would be nice to see something more robust.

The palm rest has a lightly padded surface covered in textured leather and four rubber feet on the bottom for grip. It sits flush with the macro pad once attached, adding an extra 3.52 inches (100mm) of depth to The Shrimp’s overall size. It’s an accessory that looks (and feels) very premium, and certainly adds ergonomic comfort to match the keyboard’s lower keys.

Keys and typing on the shrimp

The Shrimp has 25 keys arranged to mimic the left half of a standard keyboard. It does not have a function row, but it does have second-layer functionality (accessible with the Fn key) with secondary side legends on several keys. The keyboard comes with Gateron G Pro Yellow switches, which are linear switches with an actuation force of 50 g. This is the only switch option available at the moment, but the company says it will “probably” build a model with a hot-swap circuit board in the future.

The keyboard looks and feels great – honestly, it feels so good I actually wish it were full size. The keycaps are made of ABS, but look and feel more premium than standard ABS keycaps, with a matte finish and oversized legends that really add to the overall aesthetic. They have a Cherry profile, which means they’re slightly shorter than OEM keycaps, and have sculpted tops that make it easy to type without moving your fingers that far.

The Gateron G Pro Yellow switches were a bit heavier than I’m used to, but that wasn’t too bad as I wasn’t actually typing on the keyboard – I only used it for gaming and shortcuts.

Dials on the shrimp

The Shrimp has two tactile, notched dials with push functionality. The dials are made of plastic, but feel very durable and well built. They do stick out a bit past the keycaps though, so this could pose a durability issue for travel.

The left dial controls The Shrimp’s built-in per-key RGB lighting: turning it adjusts the brightness, while pressing it cycles through 16 preloaded lighting effects. There are only three brightness levels (high, medium, and off), so this seems a bit of a waste of dial functionality.

The 16 lighting presets are pretty well done – they’re not just a bunch of uninspired variations on standard spectrum cycles. There’s a nice variety of effects, including a few that kick in when you press a key.

The right dial controls system volume, and pressing it opens your default media center. The media key next to the right button toggles between mute and unmute.

Software for The Shrimp

The Shrimp does not currently ship with any special software, but Nordic Game Supply is looking into creating software (with a macro recorder) for the device in the future. For now, though, you can remap The Shrimp in games using in-game menus, and use free software like autohotkey to record macros and remap keys outside of games.

It comes down to

The Shrimp is an interesting gaming accessory – it’s not really a macro pad (if you want one, consider something like the Elgato Stream Deck+ or Adafruit MacroPad RP2040), but it’s not really a keyboard either. While it can be remapped using third-party software, it would take some effort to make it a dedicated macro pad (it’s set up like a keyboard, so a simple remap would remap the same keys on your main keyboard). The Shrimp could certainly be a great little macro pad if Nordic Game Supply eventually starts making dedicated software.

Since it’s not quite a macro pad, it doesn’t really make sense as an accessory for a desktop PC setup where you’d also have a full (not necessarily full-sized) keyboard. But it does make sense gamers with laptops who want to travel as light as possible without sacrificing too much of the gaming experience. It’s not perfect, but The Shrimp combined with one of the best gaming mice would provide a decent mobile gaming setup that’s a little more space efficient than an ultra-compact 60 percent keyboard like the Steel Series Apex Pro Mini.