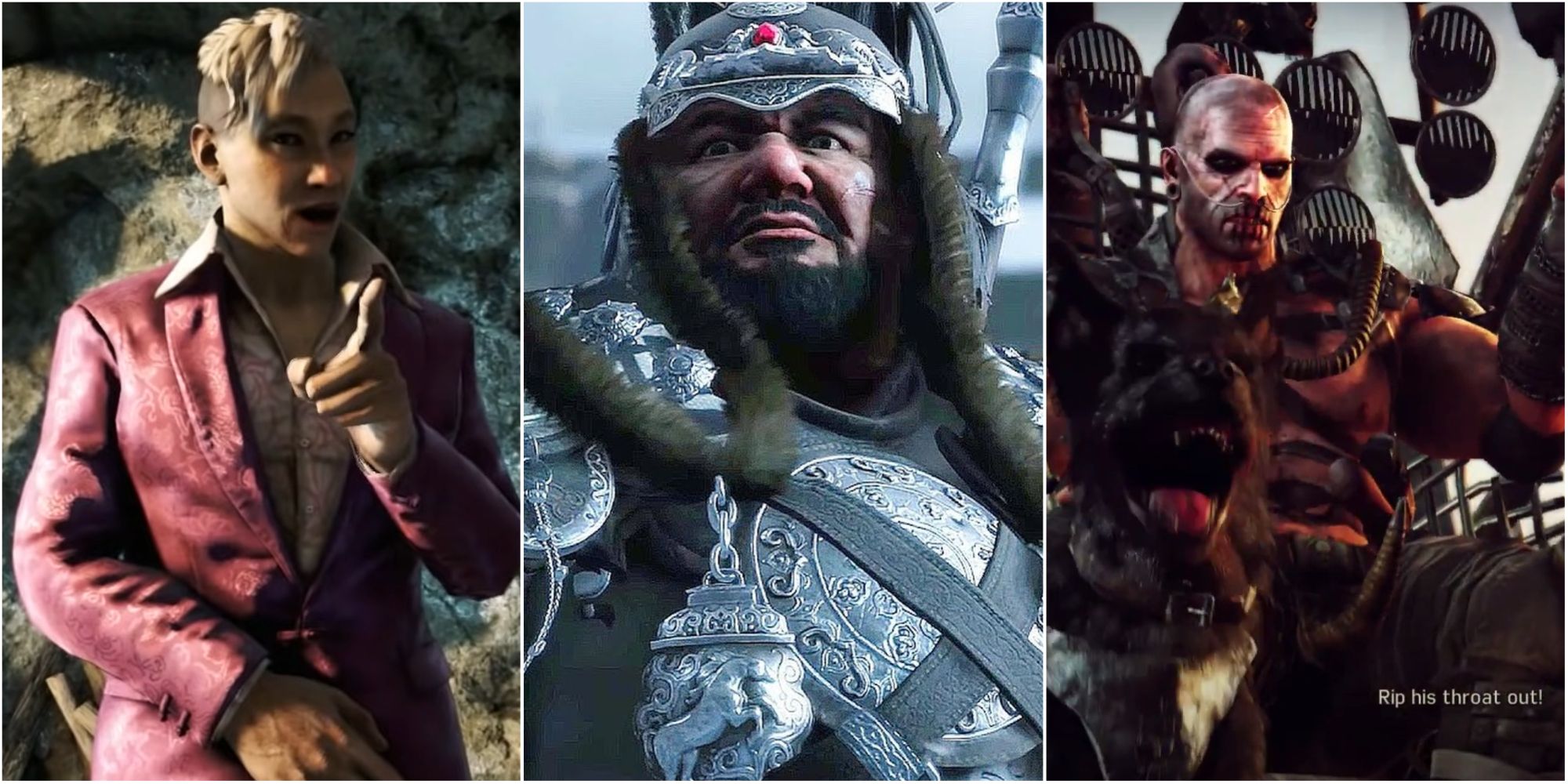 Outstanding villains make compelling storylines and make it rewarding for players to reach their final goal in a game. They can come in many forms and are notable for the excellent performances of the actors they portray. Villains are especially terrifying and disturbing when they have a sense of realism.

That becomes the case when the game’s villain models the characteristics of a tyrant. There have been many horrific and horribly repugnant leaders who have served as the main antagonist in video games, and there’s no better feeling than being the one who ultimately takes them down.

BioShock is set in the sprawling underwater city of Rapture, created by Andrew Ryan as a utopia protected from communism where art and science thrive. Frank Fontaine, a crime boss who produces the genetic enhancement drug ADAM, tries every possible way to seize Ryan’s power, even by starting war in Rapture.

In the end, he manages to kill Andrew Ryan by manipulating you to do it. In the final showdown, Fontaine undergoes horrific mutations as a result of an ADAM overload, providing a challenge to defeat him but a satisfying challenge to finally put an end to his evil plans.

Admiral Salen Kotch is the main antagonist in the Call of Duty: Infinite Warfare campaign. He is the totalitarian ruler of the Settlement Defense Front (SDF), a Mars-based political faction that is extremely anti-democratic and aims to take control of the entire solar system.

From your first encounter with the admiral on Europa, you see how cruel and cold he can be. If you beg Kotch for medical help for your men, he will shoot in turn to be soldier and says, “Care clouds judgment.” In a last-ditch effort during the finale, Kotch tries to detonate his hulking ship and take Geneva with him, but you knock him out just in time.

This filthy Mongol conqueror who besieged Tsushima, Kohtun Khan, shows no respect for the samurai or Japanese traditions. He sends men to do his bidding by killing and spitting those who disrupt his rule in the face of samurai traditions. An example is when he encounters a samurai challenger in combat and cheats by throwing a torch at him to set him on fire and then decapitate him.

Khotun Khan is a vicious figure who purposely studied everything there is in Japanese culture, only to use it against the people and manipulate faction leaders to bend to his will. He is the fictional grandson of the historical Genghis Khan and demonstrates that same fury. It was a righteous moment for Jin Sakai to defeat him and his reign of terror.

In A Plague Tale: Innocence, Vitalis Bénévent is the Grand Inquisitor during the bite plague of 1348. He sees himself as a saint in search of a miracle curse, Prima Macula, which can help him reinvent the world and fight the rat-borne disease. to get under control. The Prima Macula flows into a little boy, Hugo de Rune, and Vitalis would stop at nothing to see him captured and exploited.

Vitalis’s rogue actions and obsession with Hugo de Rune push him to extremes, including imprisoning and torturing the boy’s mother, Béatrice de Rune, for bait. He has been excommunicated from the Catholic Church and labeled a vile heretic, but it only gives him more power. He meets a very satisfying ending in the boss battle, where Hugo and his sister use the rats against him and save their mother.

With a name like Handsome Jack, it can’t possibly be a bad guy. Wrong! He is one of the most underhanded and narcissistic villains in Borderlands and gaming history. Handsome Jack kills his way to become president of the Hyperion Corporation and become a dictator of Pandora by default. He rules with a God complex and an iron fist and enjoys tormenting and killing others, even Hyperion employees.

He is even meaner than Vitalis for exploiting the powers of his own daughter Angel by locking her into Hyperion’s communications network. Jack forces her to perform his manipulations for his own interests with vault hunters. A master propagandist, he paints himself as a hero, but the inhabitants of Pandora rejoiced at his loss.

Mad Max is always about who’s boss in the Wasteland, and in the game it’s the warlord Scabrous Scrotus, a son of Immortan Joe, who was the main villain in Fury Road. While the name may seem funny, he is one of the most menacing rulers the Wastelands have ever had, motivated by his greed and drive to terrorize anyone who enters Gas Town.

Scrotus is an incredibly vicious leader, downright inhuman. Besides leaving Max for dead and stealing his car, later butchering the only woman and child Max came to love to hurt, he also mistreats animals. So when that inevitable final battle came between him and Max, he rightly got what was in store for him.

General Sebastiano Di Ravello is the evil Medici dictator who yearns for world domination. He shows how feared he is the moment he is introduced. Di Ravello is furious at losing territory, so he hands the lead officer a pistol, who immediately shoots himself. He then orders an entire city to be razed to the ground, all to get the attention of his enemy, Rico Rodriguez.

Rodriguez is an agent of the rebel opposition who tries to take down Di Ravello and give Medici his freedom back. Ultimately, their efforts cause the general to flee in a helicopter, which you must shoot down in the final battle. He can then be shot or thrown into lava, a symbolic end for him.

Far Cry strives to take on some of the most sadistic villains. Pagan Min is the autocratic ruler of Kyrat, a fictional region in the Himalayas. The moment you meet him, Min shows his barbarity in full. He repeatedly stabs a soldier who was firing at a bus when ordered to stop him. Then he complains about all the blood on his shoes and takes a selfie with you.

Pagan’s tone is also very erratic and unpredictable, adding to his intimidating demeanor. However, he is very forgiving and kind to you, even though you are part of the Golden Path resistance. You get a lot of chances to kill him anyway, and most players choose the option because it’s still a Far Cry game and he’s an extremely repulsive man.

Antón Castillo is another example of the bloodlust and ferocity of Far Cry villains. He is a much more oppressive and ruthless dictator who rules Yara, a fictional Caribbean country. Castillo is forcibly urging Yarans to grow tobacco plants that have been treated with harsh chemicals that poison them, but will have them killed regardless of breaking the rules.

RELATED: The Most Intimidating Villains in Action-Adventure Games

He is also no stranger to ordering public executions and shooting inmates. Most sickeningly, he guides his son, Diego, to adopt his ways by asking him to shoot prisoners and witness their torture. It was true justice to watch Antón meet his end.

If there’s one despot worse than Hitler in the Wolfenstein universe, it’s Frau Irene Engel. She has been a ruthless threat since The New Order and has now risen to the highest rank of Obergruppenführer. Engel is a vicious antagonist responsible for decades of monstrous atrocities and now hunts down the resistance known as the Kreisau Circle.

She is an extremely racist and most overzealous follower of the Nazi ideology. She even admitted to wanting to kill her own daughter for being overweight and not beheading a resistance leader when she ordered it because it shows weakness. It was a tumultuous moment when you ambush her during her interview and go horribly into town with an axe.

NEXT: Game Villains Who Want to Become Gods