According to UN Secretary-General António Guterres, wealthy economies should hit oil and gas companies with new windfall taxes to provide relief to countries suffering from climate change and those struggling with rising energy and food bills.

On Tuesday, the UN chief accused energy giants of “splurging on hundreds of billions of dollars in subsidies and windfall profits as household budgets shrink and our planet burns.”

Guterres’ comments, at the UN General Assembly in New York, follow a European Union proposal to introduce a windfall tax on oil, gas and coal companies, many of which have reported record high profits as the Russian war in Ukraine and an energy crisis pushed prices up.

The European Commission proposes that EU countries take a 33 percent share of the company’s excess profits. The UK introduced a 25 percent windfall tax earlier this year to provide relief to people struggling with their energy bills, but newly installed Prime Minister Liz Truss has said she will not renew this winter to support a much larger subsidy program. Pay. The next. The administration of US President Joe Biden considered the idea over the summer, but it gained little momentum.

“Today I call on all developed economies to tax the unexpected profits of fossil fuel companies,” Guterres told the Assembly. “Those funds should be funneled in two ways: to countries affected by the climate crisis, and to people struggling with rising food and energy prices.”

His comments also come as parts of the world are ravaged by extreme weather events fueled by the man-made climate crisis. More than 1,500 people died in Pakistan during three months of extreme monsoon rains that scientists have linked to climate change. More than 300 people have died in flooding in Nigeria this year, according to disaster relief authorities there.

Typhoons and hurricanes have caused flooding in Puerto Rico, the Dominican Republic and Japan this week. Drought affects large parts of the United States, China and Europe.

Guterres warned that a “winter of global discontent is on the horizon”, with inequality “exploding” and the cost of living crisis “raging” as the planet burns.

“We need to hold fossil fuel companies and their enablers to account,” he added. “That includes the banks, private equity, asset managers and other financial institutions that continue to invest and guarantee carbon pollution.”

In the second quarter of this year, oil and gas giant Shell made a record profit of $11.5 billion ($17.2 billion), breaking its previous record set just three months earlier. ExxonMobil also broke its record during the same period, at $17.9 billion ($26.77 billion), nearly double what it made in its highly profitable first quarter. BP’s profits hit a 14-year high of $8.45 billion ($12.64 billion).

The UN General Assembly is likely to be dominated by the Russian war in Ukraine. The climate crisis will nevertheless be inevitable and will intersect with several topics on the agenda, including energy and food security. 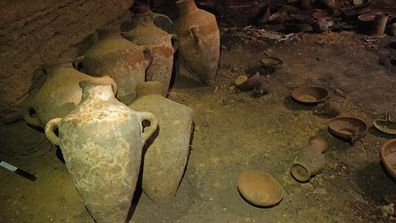 Digger breaks through to ‘once in a lifetime’ discovery

“The climate crisis is the defining issue of our time,” Guterres said. “And it should be the number one priority of every government and multilateral organization. And yet climate action is being put on the back burner — despite overwhelming public support around the world.”