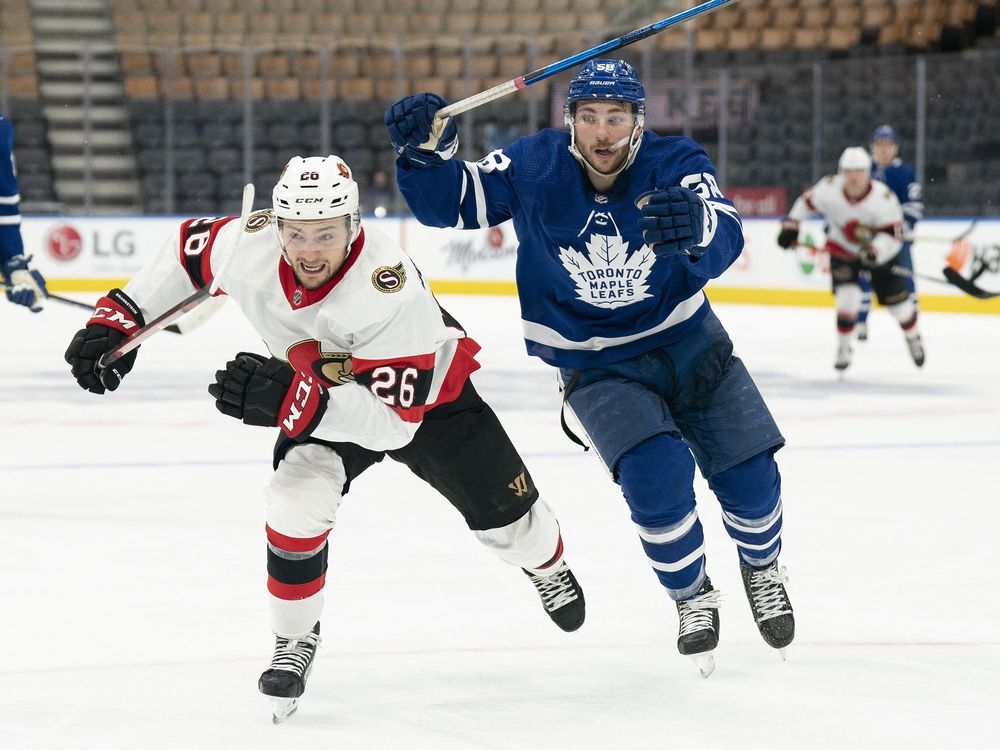 TORONTO — The Ottawa Senators kick off the preseason with a rare doubleheader Saturday.

After finishing Day 2 of Friday’s training camp at the Canadian Tire Center, 45 players packed their bags and boarded a play for the short flight to the Big Smoke.

Sign up to receive daily news from the Ottawa SUN, a division of Postmedia Network Inc.

The next issue of The Ottawa Sun Headline News will be in your inbox soon.

On Saturday, the battle for training camp jobs will begin in earnest as the Senators take on the Toronto Maple Leafs at 1:00 p.m. and 7:00 p.m. puckdrops at Scotiabank Arena.

No, this isn’t make or break, but later on these two games will help determine where everyone fits when CEO Pierre Dorion, head coach DJ Smith and the rest of the hockey team make the final decisions.

The good news is that it gives the young players a chance to compete against the likes of Auston Matthews, Mitch Marner and Michael Nylander. The Leafs hope to be contenders for the National Hockey League this season.

“You want to see what players can do against other NHL players,” Smith said Friday. “Structure is going to help a lot of players, especially (those) who have been in the league for a long time. They will be able to rely on structure and their smarts.

“You have to be able to play in the NHL game. That’s what some of these exhibition games will show us.”

Players all have different goals during the preseason.

The returning players try to use them as a tune-up to make sure they’re ready for when the puck actually falls.

Players sent to the Senators’ American Hockey League branch in Belleville want to show that they deserve to be among the first to be called up to the NHL when there are injuries.

Young players who haven’t had a chance to play in the NHL want to show that they belong at this level.

That’s why you’re going to see a lot of mixing and matching in the next three weeks.

We get the chance to see Jake Sanderson, the top contender, against NHL players for the first time, while Alex DeBrincat, Claude Giroux and Tim Stutzle will skate together up front for the first time. All this makes these games intriguing.

The Senators have only held two scrimmages, so if you feel like they’re jumping into preseason pretty quickly, you’re right.

“This is the first time I’ve been through an exhibition game for just two days and then,” said Smith. ‘Normally you have another game within the team (Saturday).

“It’s an NHL game and you’re going to do everything you can to be competitive, but at the same time we’re evaluating guys. It’s going to be more of a competition between the teams because the teams are pretty evenly split.”

The good news is that this gives the senators a chance to see everyone they want to see at least once.

Goalkeeper Cam Talbot, who took over from Minnesota Wild in the off-season, kicks off Game 1. It wouldn’t be a surprise if he played 30 minutes before Kevin Mandolese takes over.

Anton Forsberg, who carried the ball for the senators last season, starts the nightcap. Again, it would make sense if Belleville’s Mads Sogaard played the second half of that.

Goalkeeper coach Zac Bierk has drawn up a plan on how the senators will use their netminders during the preparation. Talbot, 35, commented that he just wanted to have enough playing time to make sure he was ready for the regular season.

“Usually games from 2.5 to 3.5 is a good idea. You want to exaggerate yourself in the preseason. It’s a long season as it is,” said Talbot. “You’d like to start half a game, then maybe a couple full and a third in between.”

As is well documented, the Senators have made a lot of changes during the off-season, so they want to start building chemistry before the puck is dropped against the Buffalo Sabers for real Oct. 13.

This is just the first step to making sure everyone is on the same page. The club will then send a group to Winnipeg consisting mainly of young players due to the long journey involved on a match day.

“This will shift into another gear on Sunday, when we organize Fan Fest and we start the work of special teams,” said Smith. “(Camp) will really (change) after the Winnipeg game (Tuesday). That will clear things up. We’re going to take a closer look.”

With 59 players in the camp, the Senators will soon be moving to more workable numbers. Junior strikers Dalyn Wakely and Reid Valade and defenseman Chandler Romeo were all returned to their Ontario Hockey League teams on Friday.

If you want to make an impression, you have to do it quickly.

“When you play against a team like Toronto that’s as deep as they are, you’re playing against a good lineup no matter what lineup you get,” Smith said. “That’s better for us because you get to see if guys can do it against the better guys in the league.

“And if they can do it under the real refs, the real rules and all those things. Usually it always resolves itself.”