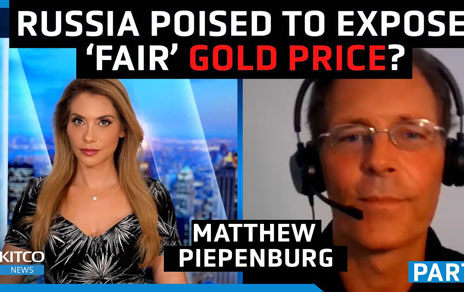 Russia proposes its own international standard for precious metals after being banned by the London Bullion Market Association (LBMA). precious metals industry” and create an alternative to the LBMA.

Russia is also proposing to fix the prices of precious metals in the national currencies of the main member states or through a new currency, such as the new BRICS currency proposed by Russian President Vladimir Putin.

“Putin knows, as everyone knows, that the LBMA is an open joke,” said Piepenburg. “It is legalized use of leverage to artificially suppress the gold price.”

Piepenburg referred to LBMA banks that are “short of thousands upon thousands of levered contracts while most of the market goes long,” and engaged in an “artificially legalized way” of suppressing the gold price.

If a monetary reset occurs, Russia could set up a reserve currency backed by a basket of commodities, including gold.

“Russia and the East like things like fertilizer, gold, hay and hard assets,” Piepenburg said. “As we de-dollarize, as the Petro-dollar is diluting with other exchanges and other transactions, they will do the same with the gold market because it’s real, it’s a monetary metal.”

On the western side of the monetary reset, the International Monetary Fund (IMF) is supporting countries in their development of Central Bank Digital Currencies (CBDCs), programmable tokens issued by a country’s central bank. In February, IMF chairman Kristalina Georgieva said CBDCs are potentially better than stablecoins and “un-backed crypto assets”.

Piepenburg claimed that the IMF would ensure CBDCs are backed by gold.

“[The IMF has] admitted that before [a CBDC] to have any credibility it must have partial backing in real assets, i.e. physical gold,” he explained. “To have any kind of credibility it will be like a western chapter 13 or chapter 11. They have to restructuring debt.”

Piepenburg pointed to the US having a “debt problem”, with a debt-to-GDP ratio of 123 percent.

“The West and the US are delighted to have not had a gold chaperone since 1971, when Nixon upgraded the global gold standard,” he said. “It was a way to have unbridled euphoria with the US dollar.”

Piepenburg called the US dollar “mouse click money,” Piepenburg claimed that a Western monetary reset would be necessary when “even the most average investor has lost faith in central bank optics and double-fork-tongue excuses.”

While he respects “the intellectual argument behind cryptos in general, or Bitcoin and Ethereum in particular,” Piepenburg said “Bitcoin is a speculative asset.”

Piepenburg further claimed that gold is a more stable store of value than Bitcoin.

“Gold is, I think, a lot more stable,” he explained. “It’s a better husband than the Playboy polo player, and that’s kind of what Bitcoin is. I could be wrong… [but] I still think gold is emerging as a victorious asset anyway.”


Piepenburg is very optimistic about gold, to get his gold price prediction watch the video above.