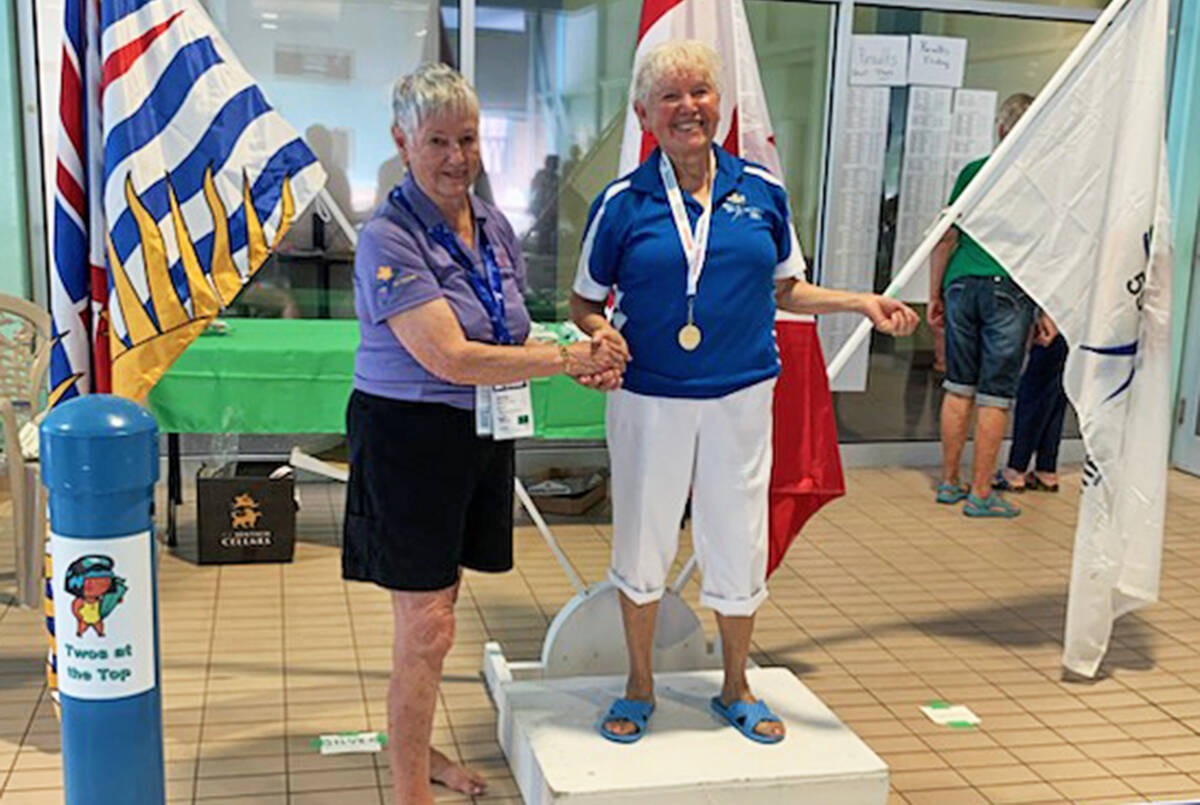 Ronald Huckerby competed in the men’s 90-94 track and field events, taking gold in discus, weight, javelin, and hammer throw; silver in shot put and long jump and bronze in the 100 meters.

Myriam Schanofski, an 83-year-old swimmer, has won five medals, including gold in the 50m butterfly, silver in the 25m fly and 200m individual medley, and bronze in the 100m free and 100m IM.

Ann MacDonald also came from Maple Ridge in the women’s 80-84 class. She won gold in the 25m fly, silver in the 50m backstroke and 100m IM, and bronze in the 50m breaststroke and 50m free.

Ken Townsend competed in men’s 75-79 athletics, winning gold in discus and hammer, silver in weight and pentathlon throws, and bronze in shot put and javelin throw.

In the dragon boat races, Maple Ridge’s Lillian Pusch was part of the Thunderstrokers team representing the Fraser Valley that took gold, and Lilian Fuller was on the Fortified team that took bronze.

In pickleball, the men’s doubles 65-plus team of Richard Harmston of Pitt Meadows and Ed Salvail of Maple Ridge took silver.

Richard Bradshaw of Pitt Meadows was part of a bronze mixed tennis team in the 65-69 age bracket.

In women’s curling over 65, Cathy Matthews was part of a silver-winning team.

Sue Scott and Leanne Fawcett of Pitt Meadows were part of a silver medal team, the GeriHatricks, in women’s over-55s hockey.

The kettle was lit by Betty Brussels, a 98-year-old swimmer from New Westminster, the oldest competitor in the. She received a standing ovation at the opening ceremony and also won three gold medals.

There were 2,600 participants and 850 volunteers who took part in 22 different activities and sports ranging from football to snooker.

“Everyone’s hard work was reflected in the smiles, achievements and memories of volunteers and participants,” said Clint Flood, the Games’ general manager. “Thousands of hours of detailed planning go into the five days of this Game. What makes it worthwhile is to watch athletes achieve and exceed their goals; seeing people smile and connect with friends old and new; and to hear from spectators that they also want to participate.”

Do you have a story tip? Email: ncorbett@mapleridgenews.com