OPINION —— Britain has a new king and while Charles III and his two direct heirs will present a very male-dominated monarchy for decades to come, the future of the royal family looks distinctly feminine.

The women of Windsor have gathered in the days since the death of the matriarch of the family, Elizabeth the Secondto form a new powerful alliance that will lead the monarchy forward under the reign of King Charles III.

All four women have already played an important role in moving the grieving family forward﻿, helping to form a united front to the world that took part in their heartbreak.

Camilla, who has always been her husband’s greatest champion, is in the midst of a public reinvention.

Formerly one of the most hated women in the UK for her role in the Charles-Diana saga of the 1980s and 1990s, sentiment towards the former Duchess of Cornwall has skyrocketed.

READ MORE: Personal details you may have missed at the Queen’s funeral﻿

In the 17 years since their marriage, the British have been very fond of Camilla, and earlier this year she received the utmost support from her mother-in-law who decreed that Camilla would be known as Queen Consort when the time came.

That time is now and since the Queen’s death on September 8, Camilla has been an unwavering support for the new King.

Camilla continues battling with a reported broken toe, and her long-reported sense of humor would no doubt have been a welcome relief to her husband in what has been a marathon of royal engagements since his mother’s death.

﻿Respectively 73 and 75 years old, Charles and Camilla have come into their roles — the most important of their lives — at an age when most are retired.

Perhaps alluding to how she might approach her own position as queen consort, Camilla praised the late monarch by emphasizing how Elizabeth II had “played her own part” during her time on the throne.

While Camilla holds the top female role under her husband’s reign, she will be heavily dependent on her stepdaughter, who married into the family in 2011.

The self-assurance of the Princess of Wales has been a comforting sight during the past 10 days of grief.

Catherine’s rock-solid determination and stoicism﻿ deserves the long praise she has received from commentators and royal onlookers alike.

The actions of the Princess of Wales since the Queen’s death are testament to her worth to the monarchy and her ability to sit high among the protagonists.

That King Charles immediately bestowed the titles of Prince and Princess of Wales on his eldest son William and his wife shows how much he will rely on them in the weeks and years to come.

READ MORE: ‘Catherine is now the most valuable woman in the House of Windsor’

‘Catharina has already shown at every opportunity how adept she is at leading the monarchy into the future.

From being a unifying force joint involvement with the Sussexes in Windsor, to gently guide her two children as they walked behind the Queen’s coffin at Westminster Abbey, Catherine was a calm and dignified figure at every step.

It is her combination of normal and regal at the same time that the audience loves so much, she is the epitome of peace and tranquility.

A similar sentiment can be said of Sophie, the Countess of Wessex, who has been one of the hardest-working members of the Royal Family for decades while receiving little fanfare.

from Sophie comforting gesture to her grandnephew Prince George was beamed around the world at the Queen’s funeral, exemplifying her maternal side that has endeared her to so many people.

She and her husband Prince Edward, the Queen’s youngest son, took a stroll outside Buckingham Palace on Saturday – and the Countess was overwhelmed by members of the public who wanted to hand her bouquets of flowers and shake her hand.

Sophie’s down-to-earth approach and her ability to focus on her work, without lusting for publicity, is what many believe has earned her the title of the Queen’s Favorite Daughter-in-Law.

Her children will probably also play a greater role under the reign of King Charles.

READ MORE:﻿ The most poignant moments in the farewell of the late Queen

Although largely kept out of the public eye until recently, Lady Louise, 18, and James, Viscount Severn, 14, stood by their grandmother’s coffin on Saturday night under the watchful eyes of Sophie and Prince Edward.

Comparisons were immediately made between a young Prince William walking behind his mother’s funeral and the face of his young cousin James at Westminster Hall.

But arguably the hardest-working member of the royal family, aside from the late Queen and King Charles, is Princess Anne, whose key role under the new reign is all but guaranteed.

Anne, 72, is expected to continue her supporting role for her brother, but could also take an even higher place in the royal pecking order.

Anne’s values ​​for the monarchy are her famous no-nonsense approach and rock-solid work ethic.

The Princess Royal is not there for the pomp and circumstance, but for the hard work behind the scenes, the jobs that often go unnoticed but are of the utmost importance to the smooth running of the Crown.

READ MORE: ‘Catherine solidifies her place as a jewel in the crown of the monarchy’

Anne would undoubtedly also want to be kept busy after the loss of her mother. Their bond was unbreakable and Anne’s devotion to her mother was evident to the very end as Princess Royal accompanied the coffin of the deceased monarch from the moment it left Balmoral to its final resting place, days later in Windsor.

Special mention must be made for the other wives of Windsor, those who do not work in the royal family, but who are personally of great importance to the new king.

Zara Tindall, Princess Beatrice and Princess Eugenie took on visible roles in the days leading up to their grandmother’s funeral, as they kept watch over her coffin and welcomed the procession to Buckingham Palace on the Queen’s final journey there.

They also presented a worthy image to the world.

Princess Charlotte, seven, took part in her biggest official engagement yet at her great-grandmother’s funeral as a sign of what’s to come for the young royal.

With Meghan, the Duchess of Sussexwho will soon return to the US with Prince Harry, it is unclear what role she will play under her father-in-law’s new reign.

Perhaps he will make room for Meghan to stand alongside Windsor’s other wives as the royal family enters this new era without their beloved matriarch.

For a daily dose of 9Honey, subscribe to our newsletter here 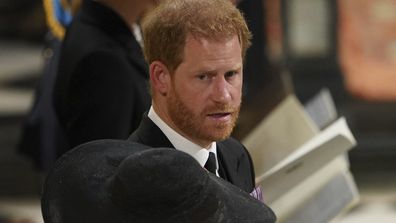 Royals come together to mourn their beloved matriarch