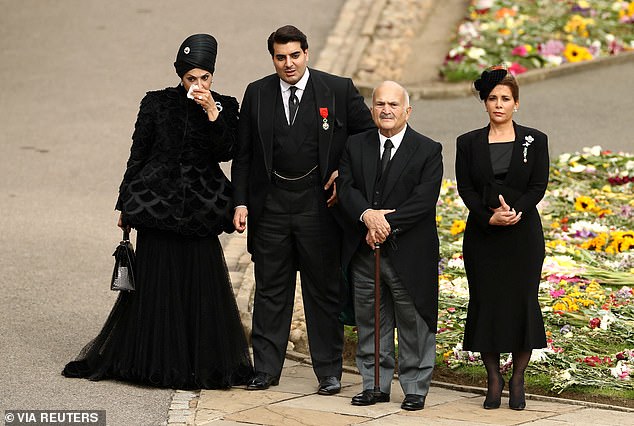 Princess Haya bint Hussein has made rare appearances in public to attend a service for the Queen in Windsor.

The princess came to pay her respects to the late monarch with her brother Prince Hassan bin Talal of Jordan for this afternoon’s service at St. George’s Chapel.

It came a day after her ex-husband, Sheikh Mohammed Al Maktoum, visited Buckingham Palace to meet King Charles at a reception on the eve of the Queen’s funeral.

There were concerns that the Sheikh Mohammed could come into contact with Prince Hassan during yesterday’s reception, a potentially awkward encounter following Princess Haya’s divorce from the Sheikh.

The sheikh, a horse-loving friend of the royal family and prime minister of the United Arab Emirates, has been accused by one of his own daughters of taking her hostage against her will, the Supreme Court heard. He has consistently denied the allegations.

Last year, the Supreme Court in London granted the princess full custody of the two children she had with Sheikh Mohammed after a lengthy divorce battle.

She was also awarded £554 million – the UK’s biggest divorce ever – which will mainly be spent on safety for her two children Jalila, 14, and Zayed, nine.

Since then, she has been rooted in the English countryside and was a friend of the Queen, with the couple sharing a love of horses and equestrian sports.

She was one of Her Majesty’s many close friends who attended the service this afternoon at St George’s Chapel in Windsor, where the Queen was finally buried after more than a week of national mourning. 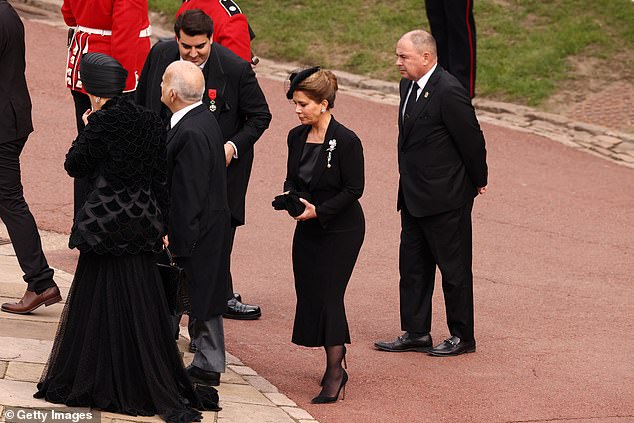 It marks a rare public appearance for Princess Haya, who received more than £500 million in her divorce from the ruler of Dubai last year. 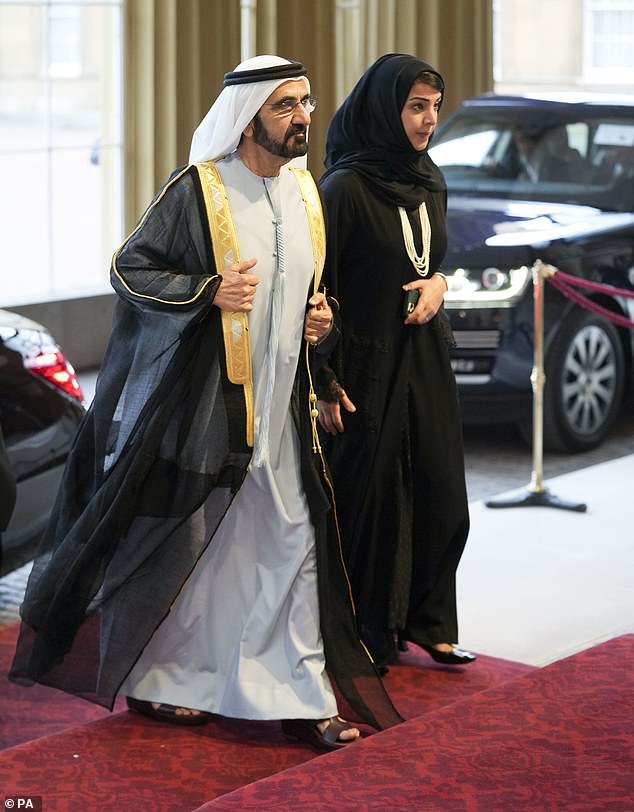 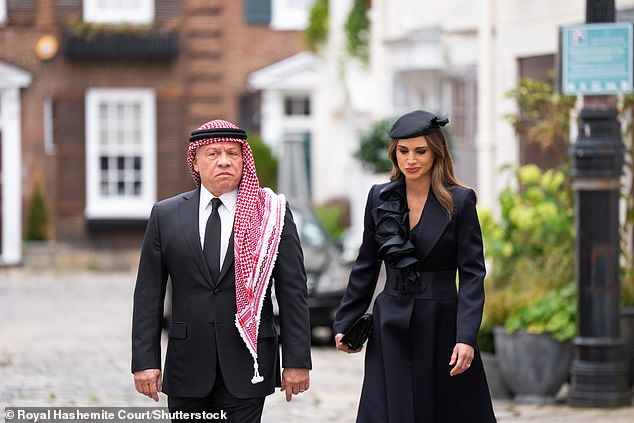 Princess Haya was not present at the Queen’s funeral at Westminster Abbey, while her half-brother King Abdullah II represented the nation of Jordan along with his wife Queen Rania

Although the princess attended the commitment service, she did not attend the Queen’s funeral at Westminster Abbey earlier in the day, while her half-brother King Abdullah II represented Jordan with his wife Queen Rania.

Earlier this week, Princess Haya touched on how she was comforted by the Queen after her mother died in a helicopter crash in 1977 and after the death of her father, King Hussein in 1999.

Speaking to Reuters outside her mansion a few days ago, Princess Haya said, “I don’t think we’ll ever see a queen like that (again) and we’ve never had that before.”

“I remember that after my late father died and my late mother died, Her Majesty was kind enough to have special words for my younger brother and me and make sure we were all right.

“She was, I think, for all walks of life and for so many people around the world… an example and an inspiration to look up to. And I did just like so many others.’

The princess, who was educated in England and attended Oxford University when she was younger, filed for divorce from Sheikh Mohammed in 2019.

Princess Haya fled Dubai to Britain in 2019 fearing for her safety, and successfully argued in court that her children are at risk of being kidnapped by their father after she alleged in court that he killed Princesses Latifa and Princess Haya. Shamsa forcibly returned when they tried to flee the UAE. These claims have been denied by her now ex-husband.

Princess Latifa was kidnapped from a yacht off the coast of India in 2017 and Princess Shamsa was kidnapped in Cambridge and returned to Dubai in 2000.

For the Queen’s funeral yesterday, Princess Latifa’s best friend said Sheikh Mohammed should not have been invited.

Tiina Jauhiainen told MailOnline that the ruler of Dubai should be rejected by Buckingham Palace and the British government, along with Saudi Arabian Crown Prince Mohammad bin Salman Al Saud.

Ms Jauhiainen told MailOnline: ‘I don’t think anyone of his reputation should be invited to the Queen’s funeral.

‘I hope we don’t see MBS [what the Crown Prince is colloquially known as] or.’ 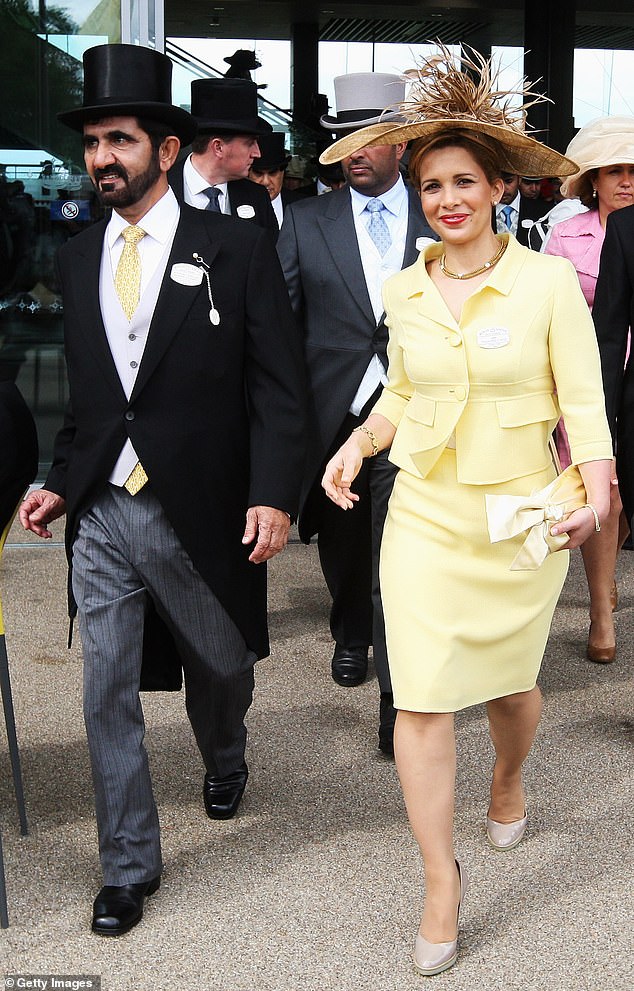 Sheikh Mohammed and Princess Haya divorced in 2019 after her affair with one of her bodyguards. Pictured: The Princess and Sheikh at Royal Ascot in June 2008

In their divorce proceedings, the court ordered Sheikh Mohammed to pay his ex-wife £554 million, including a lump sum payment of £251 million.

The Prince must also provide an HSBC bank guarantee of £290 million for his children to support an annual maintenance payment of £11 million, as well as ongoing security costs for them as adults, £3 million to cover their education and £9.6 million towards deferred maintenance.

Lawyers for the princess had argued that tight security was needed to protect her and the children from her ex-husband.

Justice Moor stated in a 73-page verdict that there was a “clear and ever-present risk” to the princess and her two young children and that Sheikh Mohammed was the “main threat to her.”

The verdict revealed how Princess Haya claimed she paid £7 million to “blackmailers” from her security staff to keep her affair with her British bodyguard, Russell Flowers, a secret, leading to the breakdown of her marriage. 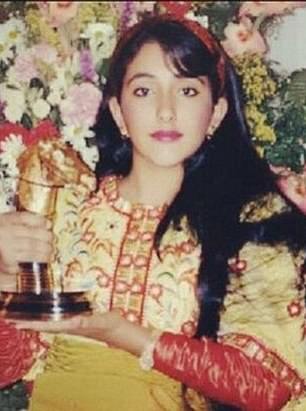 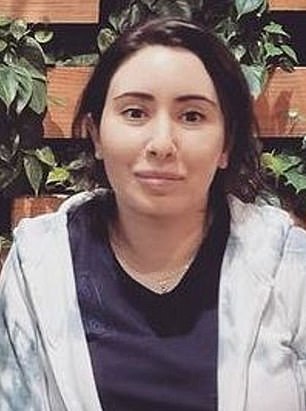 The billionaire Dubai ruler has previously been found on a probable basis to have kidnapped two of his adult daughters, Shamsa (left) and Latifa (right).

While the award allows the princess to continue living the luxurious life she enjoyed as the sheikh’s sixth wife, it is £900 million less than what her lawyers had originally demanded.

Mr Justice Moor wrote in his verdict: ‘There remains a clear and present risk to HRH for the rest of her life, whether from HH (her ex) or simply the normal terrorist and other threats the Princess faces in her position. is confronted. .’

Sheikh Mohammed was also found to have had his agents “hack” the phones of his ex-wife and her lawyers, including Baroness Fiona Shackleton.