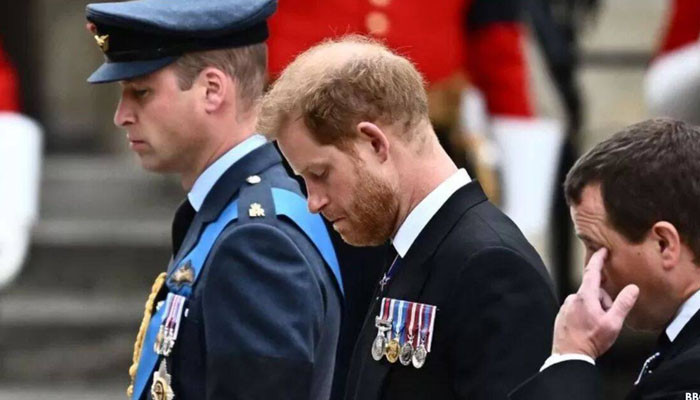 Prince William and Prince Harry walked side by side behind Queen Elizabeth II’s coffin during the procession to Westminster Abbey on Monday.

As the brothers solemnly stepped behind Her Majesty’s coffin, royal experts noted that the Duke of Sussex showed “sadness and regret” as he looked at Prince William.

Body language expert Judi James shared her analysis of Prince Harry on the sad occasion, noting how she picked up subtle signs of sadness and regret in his behavior.

“During the service, he dabbed tears and tended to look around a lot and there were at least two occasions when his more William-like gaze was on William,” she explained to The Sun.

“His facial expression suggested sadness and possible regret,” she said. “He stood in line, watching like the brother he’d once been so close to; the nephew he had loved to play with, and the sister-in-law whom he had seen as his own, came and stood before him without a glance in his direction.

James continued, “His face seemed to wrinkle in a more intense signal of sadness and his lips sucked back in.”

Meanwhile, a royal expert has claimed that Harry and Meghan Markle will “return to the US as soon as possible” after the Queen was officially laid to rest on Monday.