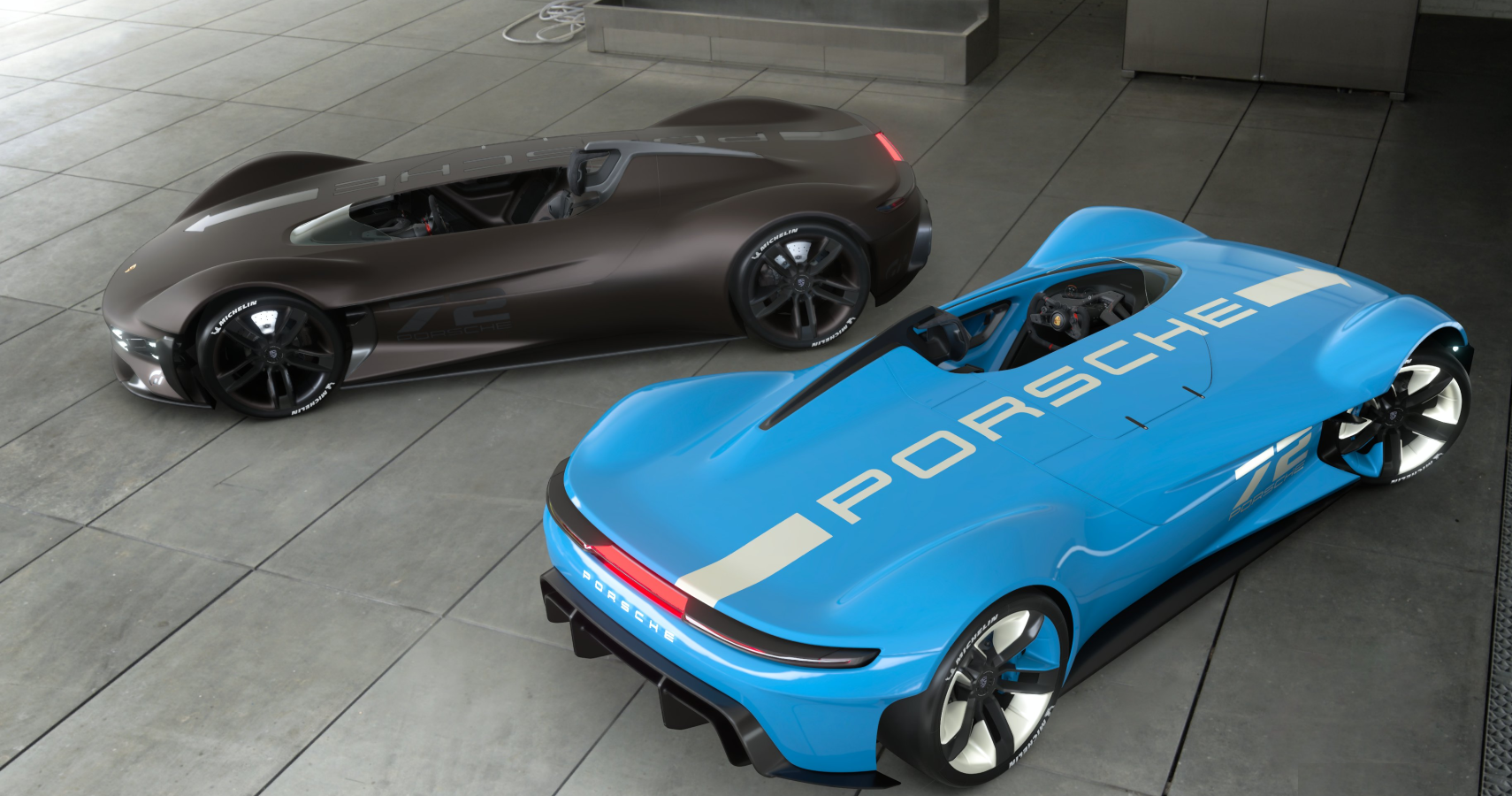 If you take a random person off the street and ask them what first comes to mind when they say: Porsche, you will get one of three responses. The Cayenne, 911 or reckless driving. On the other hand, if you take a gear and ask them, they can call it Le Mans.

They will probably call the 918 or 911 and its many derivatives. From the regular Carrera to Turbo S, each with its own Cabriolet version, Porsche certainly knows how to fill every niche in a market. Applying the same logic to their concept cars, Porsche is now announcing that the Porsche Vision Gran Turismo will receive a Spyder version for us in Gran Turismo 7 at the end of this month.

Open roof and with a single seat, the car looks different than before. With the same thrilling power figures and captivating driving dynamics, Porsche returns to make headlines in Sony’s industry-leading racing simulation.

This tail-happy concept car will soon be making its way to Gran Turismo 7.

Porsche predicted a time from 0-100 km/h in 2.1 seconds and a time from 0-120 km/h in 5.4 seconds. Top out at 217mph. Real competition for people like Tesla. All this with a somewhat utopian range of 500 km. These numbers aren’t incredibly impressive though, but where the Vision Gran Turismo would make up for it in the corners.

According to Porsche, “the Porsche Vision Gran Turismo is unmistakably a Porsche, but one with future-oriented versions of well-known Porsche design elements”. Take the known meter cluster and make it into a hologram. The iconic single-line body style of a 911 has a reinforced muscular rear.

The contemporary rear light cluster remains. But this nostalgia and respect for the brand’s past do not define the concept. As a purely digital creation, the company can create its engineer’s wildest dreams with very few restrictions. Whether that is mechanically or financially possible. As a result, the car uses completely vegan materials in the interior and a carbon titanium construction, somewhat unheard of.

The Vision Gran Turismo Spyder continues in the wake of the previous concept, but this time applies the same logic to the company’s Le Mans racers. In particular, the legendary Porsche RS Spyder and the iconic Porsche 550 Spyder.

Combining the larger build of the former with the smooth curves of the latter, the Vision Gran Turismo Spyder paves the way for the brand to follow. Embracing the future while preserving their heritage. Not surprising given the brand’s reluctance to leave the 911 as a halo car.

With the launch of the first Porche Vision Gran Turismo, Porsche claimed that they have worked hard to recreate the feeling of driving a Porsche on the track in the game. With the haptic feedback of the Playstation 5, the realism of a simulator like Gran Turismo 7 reaches new heights that were previously unattainable.

Porsche claims: “It’s also set up to provide quick, instant steering responses – just like you’d feel like driving a real Porsche on a racetrack,” coupled this with the instant acceleration provided by all-electric powertrains, and in under no circumstances will this car have a low skill curve.

Described by the German brand as the “open-top variant of the concept vehicle designed purely for the digital world”, the Spyder will provide gamers and gearboxes with the same experience as their Le Mans racers. If you go hunting for gameplay footage from the original Vision Gran Turismo, you’ll be treated to a ridiculously tail-happy car.

With way too much power and the same features as the 911, the car strives to go sideways through turns and fast in a straight line. But figure it out, master the balancing of the slides, and you’ll be making round record after record.

The Porsche Vision Gran Turismo Spyder will be launched soon

According to Porsche, this car will come to Gran Turismo 7 on September 29, 2022. At this time, the brand has not announced whether this car will be sold in the game’s market or offered as a gift to players. The previous version of the car costs a whopping 1,000,000 credits in the Porsche section of Brand Central, the in-game dealer.

If users stuck with their million dollar credit that made up for the server outages in March, this would seem like a great way to splash that virtual cash. Compared to Bugatti and Koenigsegg, the Porsche Vision Gran Turismo Spyder looks like one of the coolest cars in Gran Turismo 7. Porsche and Gran Turismo won’t lock users into using just one livery on this particular car.

On various platforms, the German brand shows this in light blue, gray and white. All of these feature the number 72 along the side and the Porsche logo. It also has Porsche scribbled on where the passenger would sit in a normal sports car.