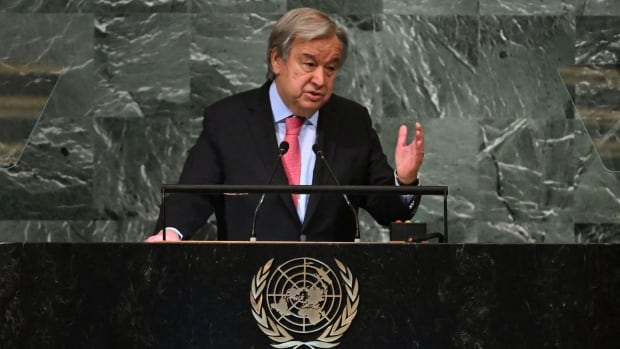 The world’s problems came into the limelight on Tuesday as the UN General Assembly opened Tuesday with dire assessments of a planet ravaged by escalating crises and conflict that an aging international order appears to be failing to handle.

After two years in which many leaders weighed in on video due to the coronavirus pandemic, presidents, prime ministers, monarchs and foreign ministers now gathered almost entirely in person for diplomacy’s most important global event.

But the tone was far from festive. Instead, it was the sound of a tense and anxious world.

“We are stuck in a colossal global dysfunction,” Secretary-General António Guterres said, adding that “our world is in danger — and paralyzed.”

He and others pointed to conflicts ranging from Russia’s six-month-old war in Ukraine to the decades-long dispute between Israel and the Palestinians. Speakers raised concerns about a changing climate, rising fuel prices, food shortages, economic inequality, migration, disinformation, discrimination, hate speech, public health and more.

Guterres, however, began with a tone of hope. He showed a video of the first UN chartered ship carrying grain from Ukraine – part of the Ukraine-Russia deal brokered by the United Nations and Turkey – to the Horn of Africa, where millions of people are on the brink of famine. . It is, he said, an example of promise and hope “in a world teeming with turmoil.”

War in Russia top of mind

The Russian invasion of Ukraine was at the top of the agenda for many speakers. The conflict has become the biggest conflict in Europe since World War II and has caused rifts between the major powers in a way not seen since the Cold War.

Meanwhile, the loss of important grain and fertilizer exports from Ukraine and Russia has led to a food crisis, especially in developing countries, and inflation in many countries.

As Jordan’s King Abdullah II noted, affluent countries having unknown experiences of scarcity are discovering “a truth people in developing countries have long known: For countries to thrive, affordable food must be on every family’s table.”

In an impassioned speech to the assembly, French President Emmanuel Macron said that no country can stand on the sidelines against Russia’s aggression. He accused those who remain silent of being “in a sense complicit in a new cause of imperialism” that is trampling on the current world order and making peace impossible.

Brazilian President Jair Bolsonaro, traditionally the first speaker, called for an immediate ceasefire in Ukraine, protection of civilians and “maintaining all channels of dialogue between the parties”. He opposed what he called “unilateral or unilateral” Western sanctions, because they have damaged economic recovery and endangered the human rights of vulnerable populations.

Neither Ukraine nor Russia has spoken yet. The assembly has agreed to allow Ukrainian President Volodymyr Zelenskyy to speak via video, over objections from Russia and some of its allies.

Zelenskyy’s speech is expected on Wednesday, as well as a personal address from US President Joe Biden. Russian Foreign Minister Sergey Lavrov will take the stage on Saturday.

Nearly 150 heads of state or government are on the list of most recent speakers, a high number indicating that the United Nations remains the only place not only to voice their opinions, but to meet privately to address the challenges facing the global economy. agenda – and hopefully some progress.

Prime Minister Justin Trudeau’s two-day visit began Tuesday with a bilateral meeting with Chandrikapersad Santokhi, the president of Suriname, this year’s chairman of Caricom, a political and economic coalition of 15 member states in the Caribbean.

The rest of Trudeau’s UN agenda is full of meetings on topics close to his heart, including climate change, gender equality and sustainable development.

Later Tuesday, he was due to participate in a roundtable with former US Secretary of State Hillary Clinton about the benefits of inclusive job growth.

The death of Queen Elizabeth and her funeral in London on Monday, attended by many world leaders, provided last-minute headaches for the high-level meeting. Diplomats and UN personnel have been scrambling to address changes in travel plans, the timing of events and the logistically complex speaking schedule for world leaders.