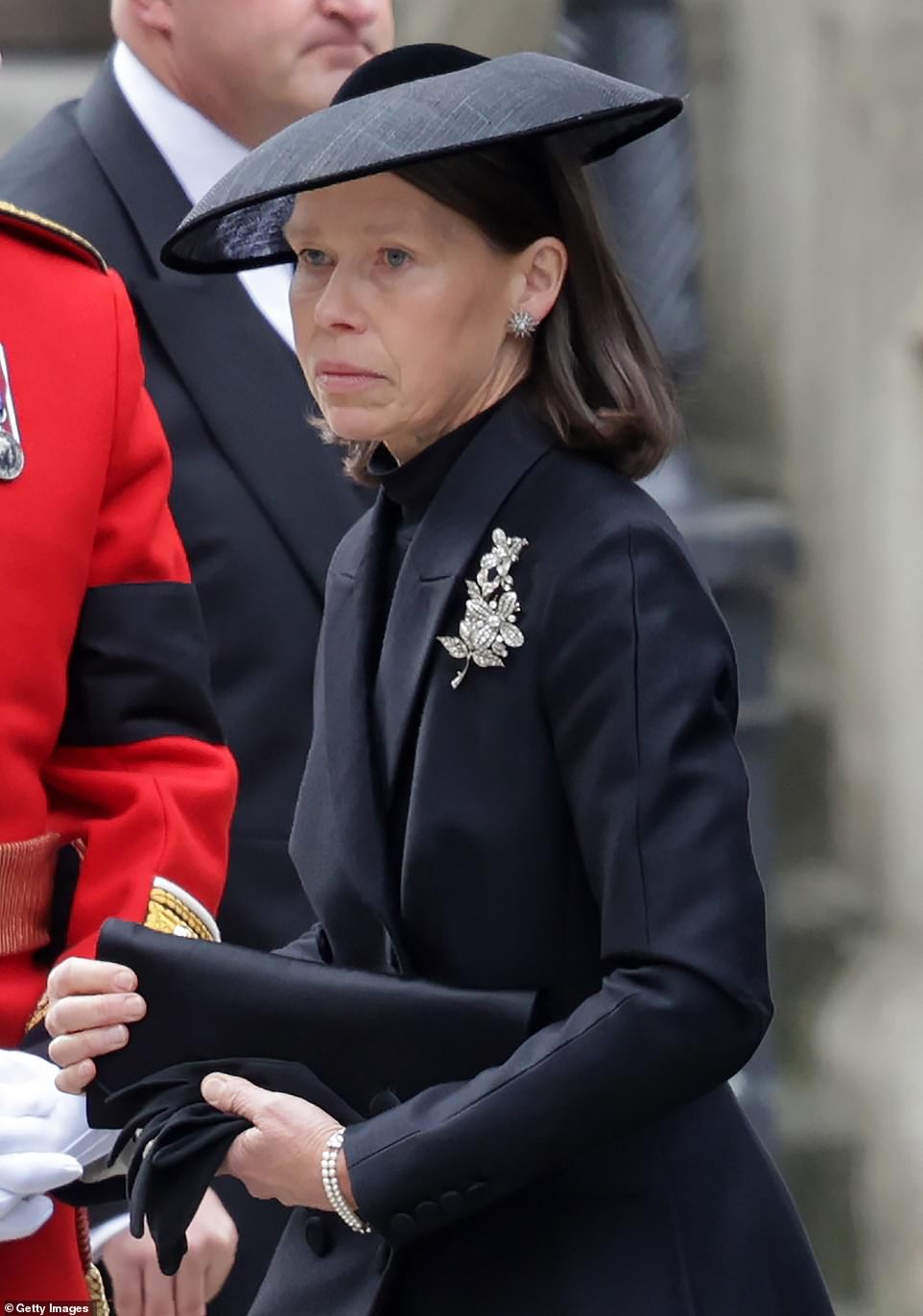 Dressed in an all-black ensemble, the Queen’s beloved niece wore the Snowdon Floral Brooches, which are believed to have been a gift from her mother, Princess Margaret.

Margaret, Her Majesty’s younger sister, was given the brooches by her ex-husband Antony Armstrong-Jones, 1st Earl of Snowdon, on the occasion of their wedding in 1960.

Over the decades, Sarah, the late Princess’s only daughter, has worn them to important occasions – including her own wedding to husband Daniel Chatto in 1994, when she wore them as a tiara, and to her mother’s funeral in February 2002.

Lady Sarah Chatto chose a sentimental piece of jewelry yesterday to attend the Queen’s funeral at Westminster Abbey (pictured). Dressed in an all-black ensemble, the Queen’s beloved niece wore the Snowdon Floral Brooches, which are believed to have been a gift from her mother, Princess Margaret. 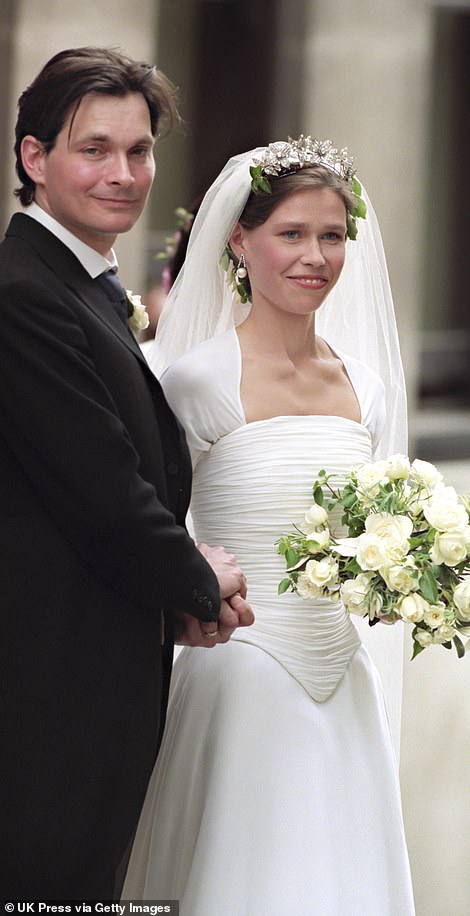 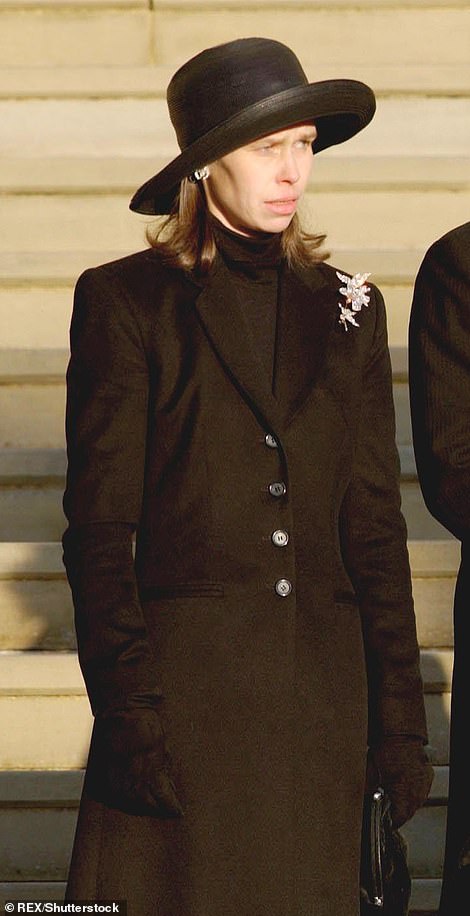 Over the decades, Sarah, the late Princess’s only daughter, has worn them to significant occasions – including her own wedding to husband Daniel Chatto in 1994 (pictured left), when she wore them as a tiara, and to her mother’s funeral. in February 2002 (pictured right)

Sarah, who had a warm relationship with her aunt all her life, and remained close to Her Majesty and Prince Philip after her mother’s death in 2002, also wore the jewels at the celebrations for the Queen and Duke of Edinburgh’s 50th wedding anniversary in 1997 .

Princess Margaret’s daughter was visibly moved as she attended the final tribute to the Queen’s life, dressed in a black coat and hat.

Sarah, also the daughter of Anthony Armstrong-Jones, First Earl Snowdon, was accompanied by her husband and sons, including Arthur Chatto, 23, who is training to become an officer in the Royal Marines, and Samuel, 26.

Last week an emotional Sarah attended the service at Westminster Hall after the Queen‘s procession, again dressed entirely in black.

Sarah, who is married to Daniel Chatto, was once described by a royal insider as sharing “a sense of loyalty, fun, duty and ridiculousness” with the Queen. 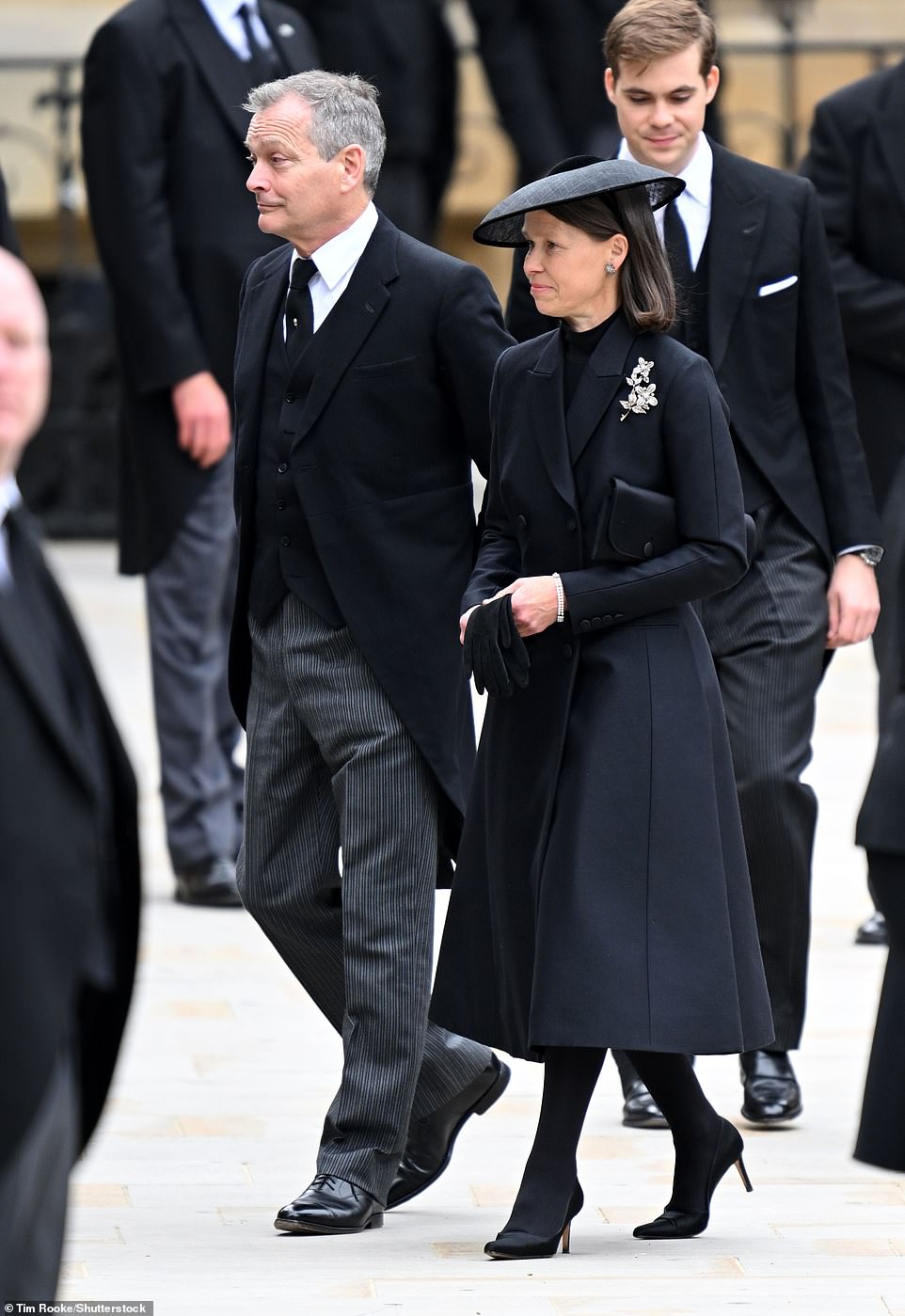 Lady Sarah Chatto pictured here with her husband Daniel Chatto as they attended Queen Elizabeth II’s funeral. Lady Sarah opted for a black dress coat and held on to a pair of black gloves as she entered Westminster Abbey 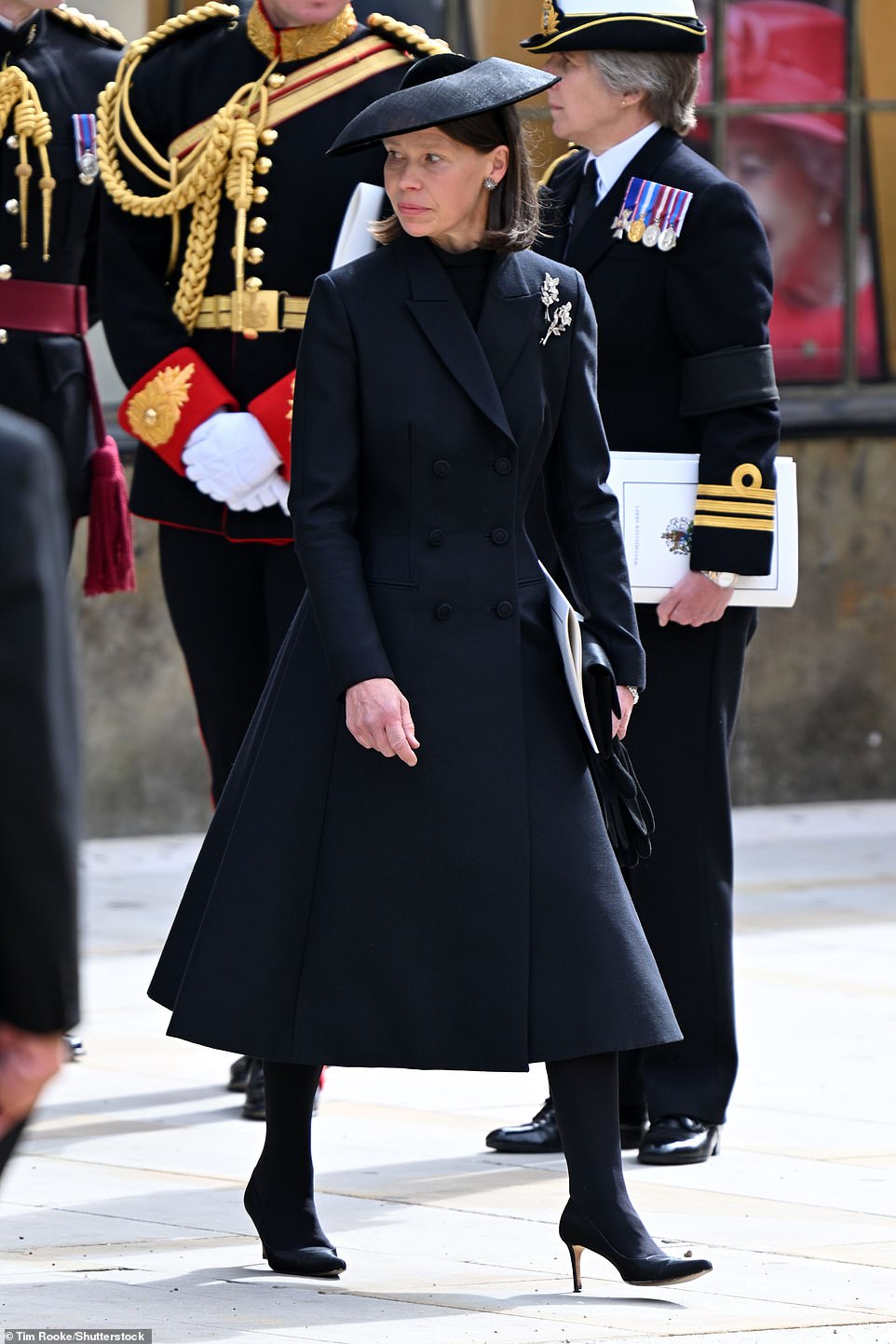 Lady Sarah Chatto opted for an all-black frock coat when she attended the funeral of her beloved aunt, Queen Elizabeth II 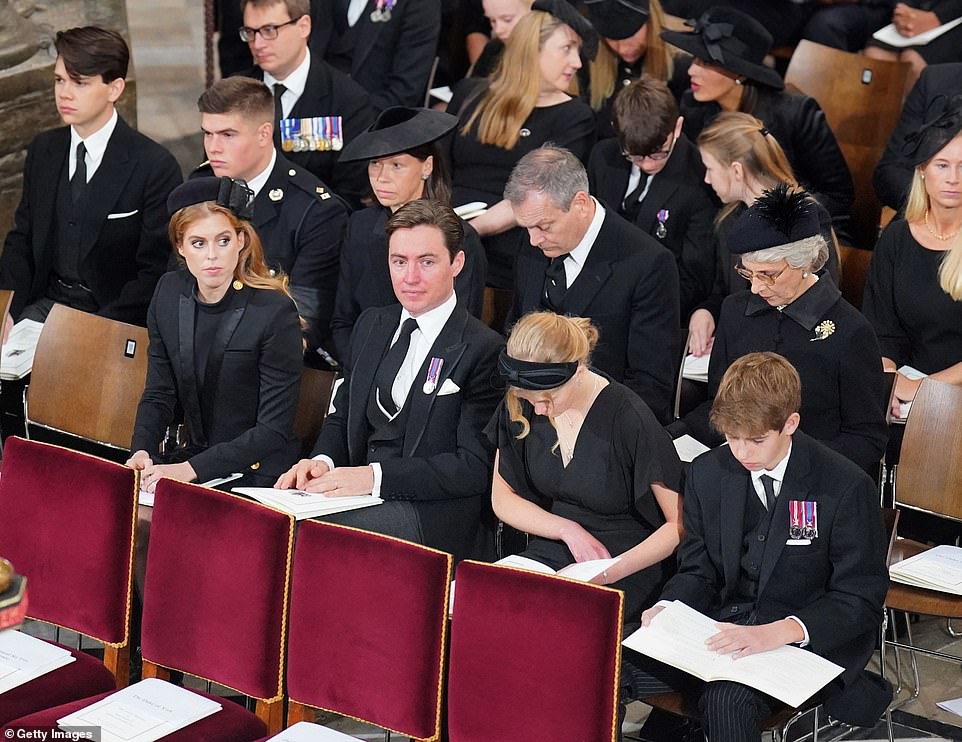 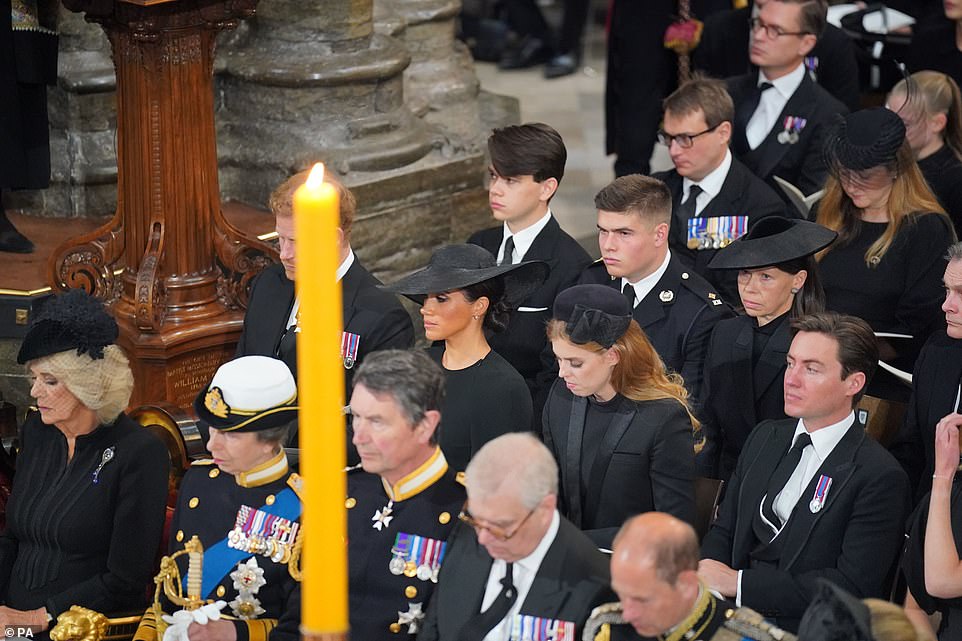 During the state funeral for Queen Elizabeth II, Sarah sat with members of the royal family, including the Queen Consort, Princess Royal and Princess Beatrice 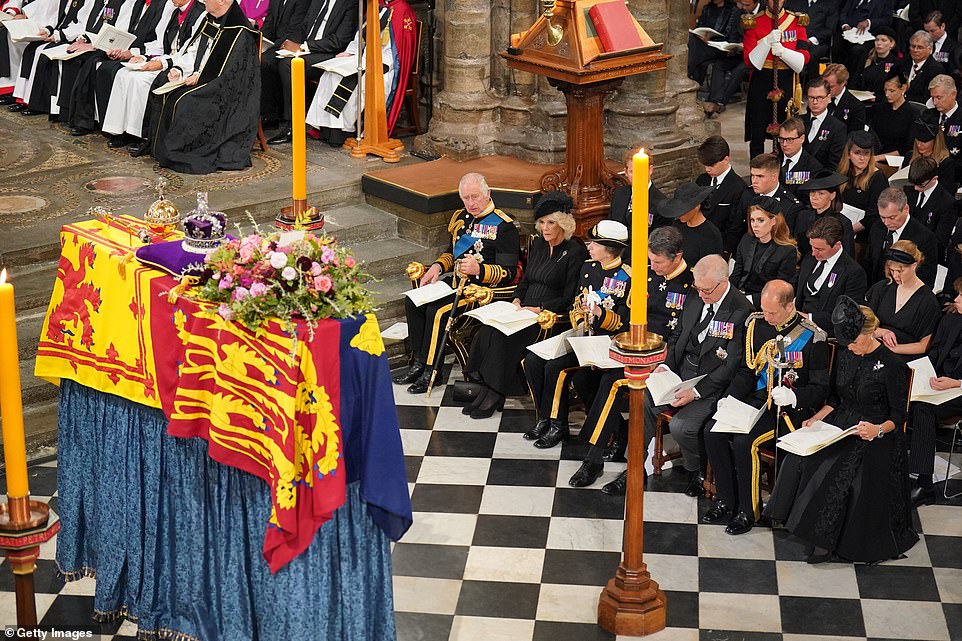 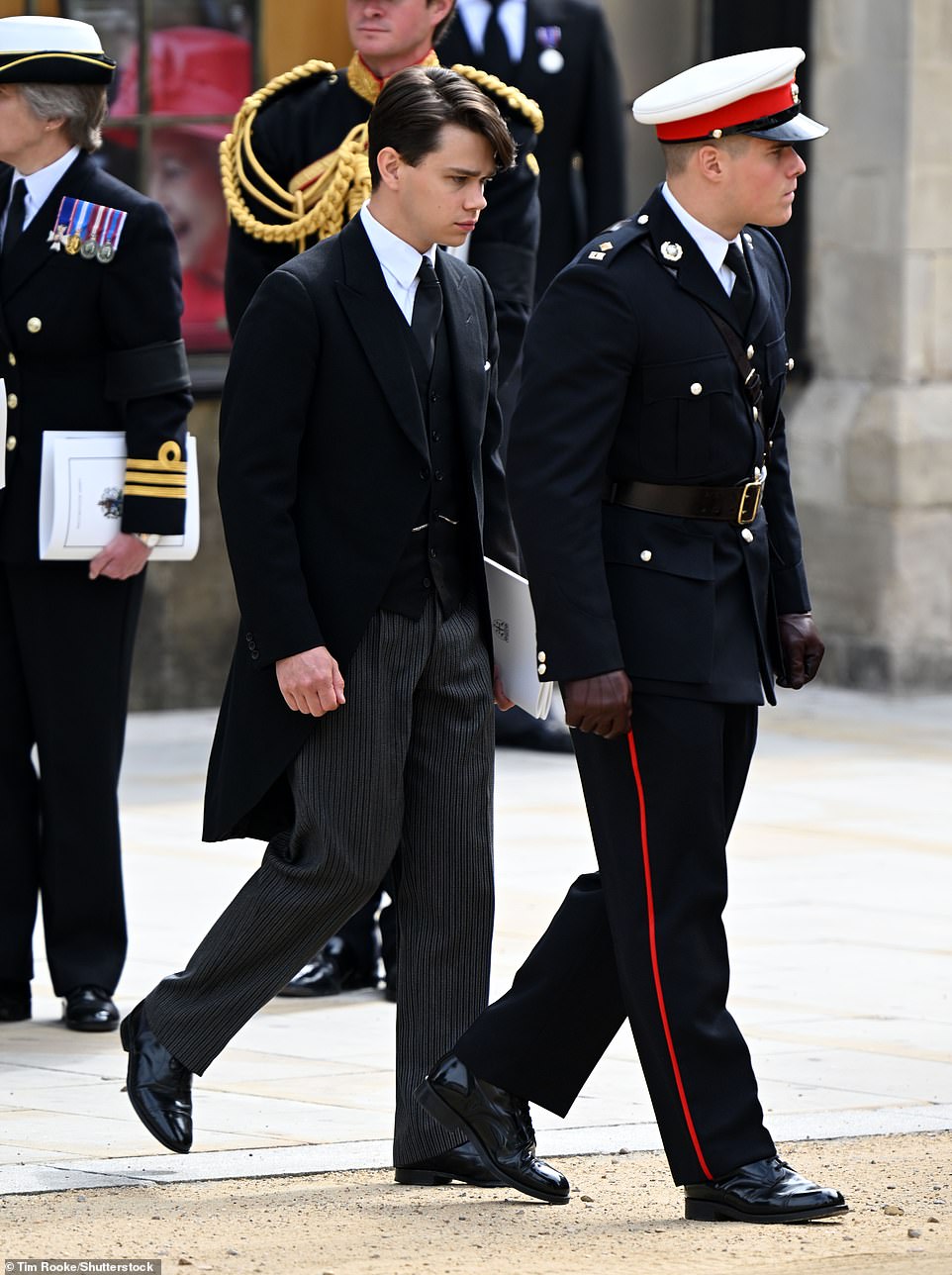 Samuel and Arthur Chatto pictured at the Queen’s state funeral at Westminster Abbey. Arthur is training to be an officer with the Royal Marines

“The Queen is very fond of Sarah and visits her company as often as possible. She’s definitely her favorite younger royal,” they said. ‘They feel very comfortable in each other’s company. A lot of giggles can be heard when they are together. They share a sense of loyalty, pleasure, duty and the ridiculous.’

Lady Sarah Chatto was born in 1964 – the last royal baby to be born in a palace rather than a hospital – within weeks of cousins ​​Prince Edward, Lady Helen Windsor and James Ogilvy.

The Queen has been described as a ‘surrogate mother’ to the siblings and was particularly close to Lady Sarah, who is supposed to remember Her Majesty from her late sister.

A tearful King Charles III and his grieving family surrounded the Queen’s coffin during her state funeral in a moving and majestic farewell to the late monarch in an extraordinary service, followed by a two-minute national silence and the Last Post. 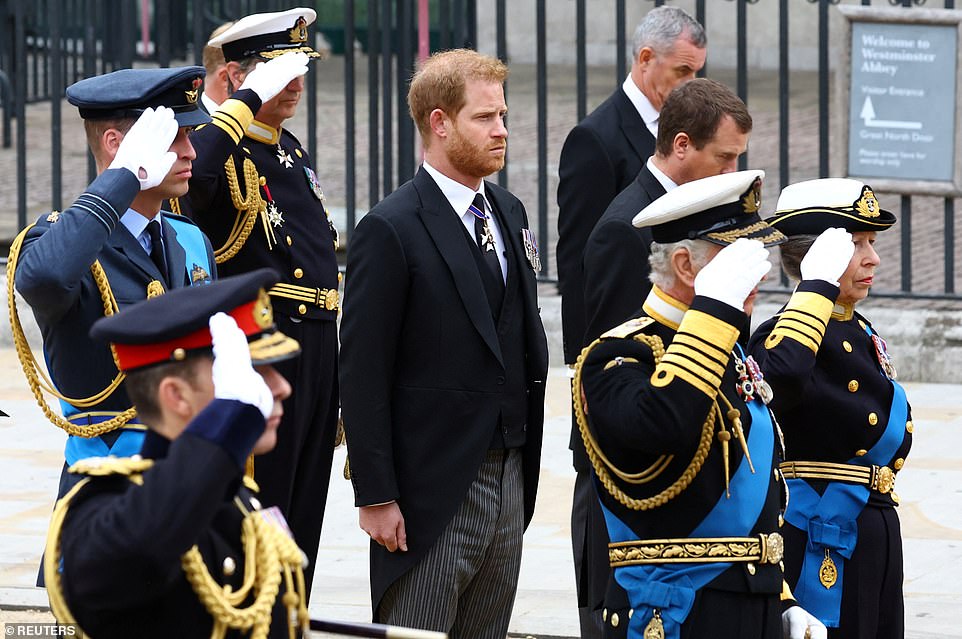 Prince Harry, Duke of Sussex, stands next to King Charles, Anne, Princess Royal and William, Prince of Wales, as they salute at the state funeral

A family in mourning: Left to right: The Duchess of Sussex, Queen Consort, Prince George, Princess Charlotte, Catherine, Princess of Wales and Sophie, Countess of Wessex stand outside Westminster Abbey after the state funeral 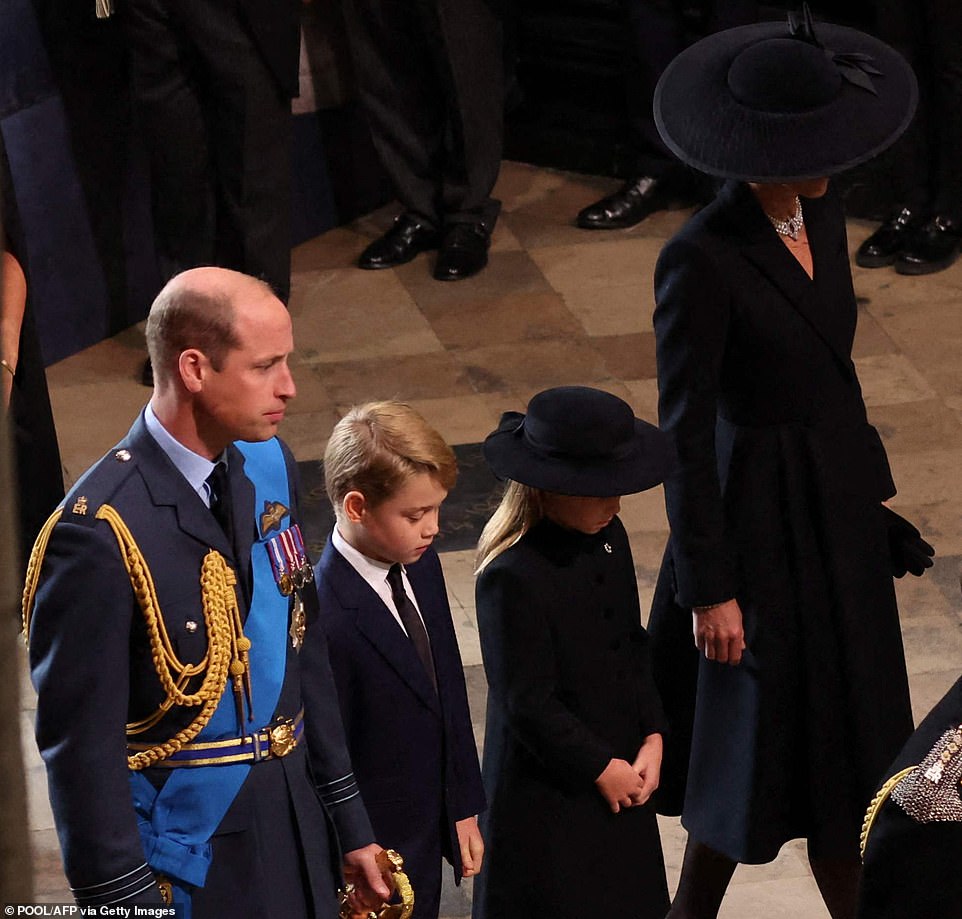 Responsibility: heads bowed, Prince Charlotte and Prince George walk between the Prince and Princess of Wales as they follow the Queen’s casket into the church

Her Majesty made her last and saddest journey from Westminster Hall to the church where she married and was crowned as Britain mourned its longest-serving monarch and the royals bid farewell to a beloved mother, grandmother and great-grandmother.

Her coffin was placed close to the altar with her crown, orb and scepter on top, surrounded by flowers chosen by the king from gardens she loved. A card in the flowers atop the coffin read simply: “In loving and devoted memory. Charles R.”

The Archbishop of Canterbury praised the Queen’s “abundant life and loving service” when he delivered the sermon at her state funeral, adding: “She was joyful, present for so many, and touched many lives.”

State trumpeters from the Household Cavalry blew the Last Post after the Archbishop of Canterbury’s praise of the Queen’s coffin and a blessing pronounced by the Dean of Westminster. Two minutes of silence followed by the whole country before Reveille was blown by the trumpeters before the national anthem was sung by the municipality.