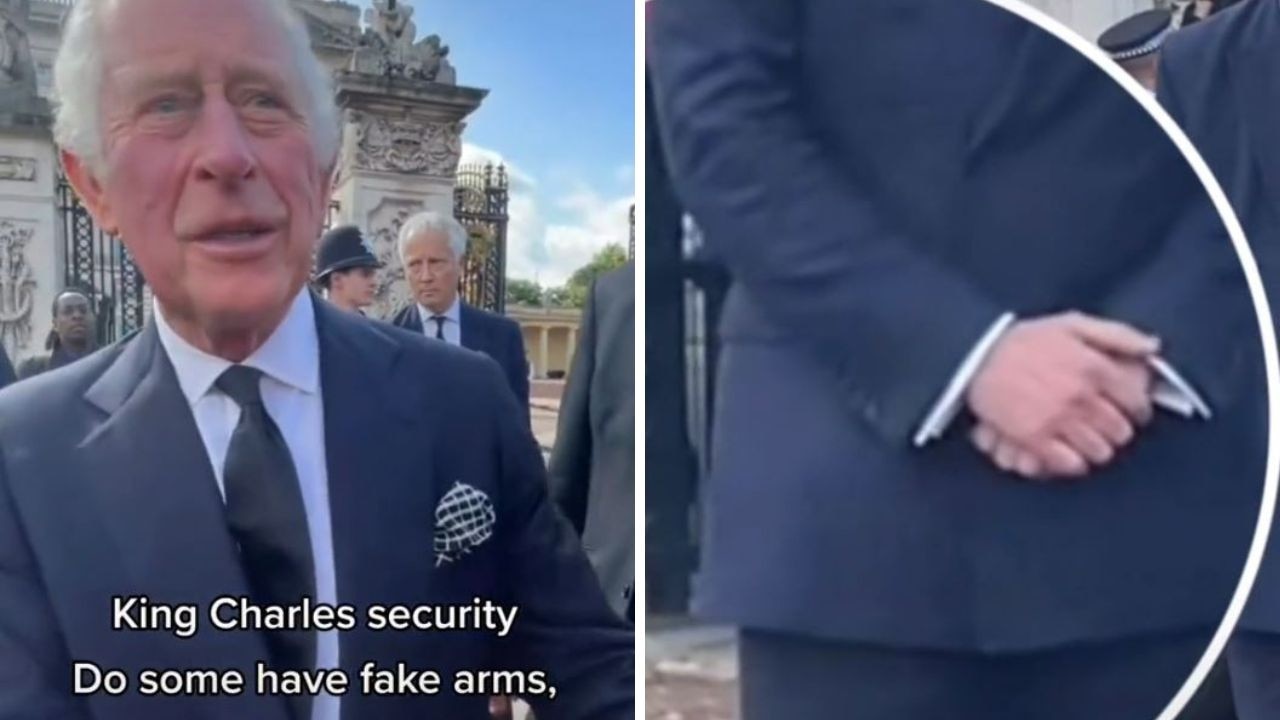 A bizarre theory about King Charles’ bodyguards has emerged after videos of the royal family and his security team recently went viral.

Some social media users are convinced that the royal bodyguards used fake hands and weapons to have their hands discreetly placed on hidden weapons.

TikTok user Jason recently shared a video where he zooms in on the hands of Charles’ bodyguards and points out the peculiar way they held and moved them.

‘King Charles’ security. Do some have fake guns, hands on guns?” he wrote on the video.

The TikToker pointed to a bodyguard holding his left hand in his right, claiming that the hand he was holding looked “suspicious”.

“It appears to be lifeless,” he claimed.

Keep up to date with the latest news about the British Royals with Flash. 25+ news channels in 1 place. New to Flash? Try 1 month free. Offer ends on October 31, 2022 >

The user then claimed that another bodyguard’s arm looked “fake”, pointing out that one of his hands was clenched into a fist while the fake-looking hand was relaxed and immobile.

“That open palm grip doesn’t change at all,” he said.

He claimed it also looked like there was a bulge under the man’s jacket, which could indicate that his real arm was hidden.

The clip has been viewed more than 14.2 million times and has garnered more than 6,700 comments.

In another video, TikTok user Kevin also noticed something strange about the hands of the royal bodyguards.

“What’s the matter with the bodyguard’s hands?” he captioned the video, which has been viewed more than 3.7 million times.

The video, captured as King Charles greeted the audience, focused on one of the guards holding his hands in front of him in a peculiar way.

Comments on the videos appear to be divided as to whether these TikTok users read too much into the movements of the royal bodyguards or whether they were right in their theories.

One user suggested that the TikTokers had “too much time on their hands”, while another claimed that they were “looking way too much into this”.

“No, his hand doesn’t move, so if something happens, he can get his gun out faster,” claimed another person.

However, many other users claimed that it was “common knowledge” that members of the royal security detail use imitation limbs.

“Yes. That’s the king, of course his guards have their weapons in their hands,” said one person.

“Why do people doubt it? This is certain to happen,” wrote another.

Someone else said, “Why does he act like it should be a secret, the only reason they don’t have them outside is to keep the public calm.”

Talking about bodyguards for high profile people who use false limbs while on duty is not uncommon.

There was also speculation in 2017 after Donald Trump’s Secret Service bodyguard oddly held his little finger as he chased the former US president and his wife Melania. The sun reports.

People took to social media to share their theories, including the fact that his hands looked like plastic prosthetics.

It was suggested that the reason for this was that he could keep a fully automatic rifle under his jacket.

The most common type of rifle they can carry under it is an FN-P90, as it fits comfortably under the jacket.

It has been speculated that like Trump’s bodyguard, Jeff Bezos’ security guard also carries the same fake weapons.

People took to social media to notice that the Amazon boss’s bodyguard’s hands looked like prosthetic plastic hands — and they also noticed that, oddly enough, he was holding his little finger in his other hand.

However, finger holding is thought to be a position used by bodyguards as it allows for quick action.