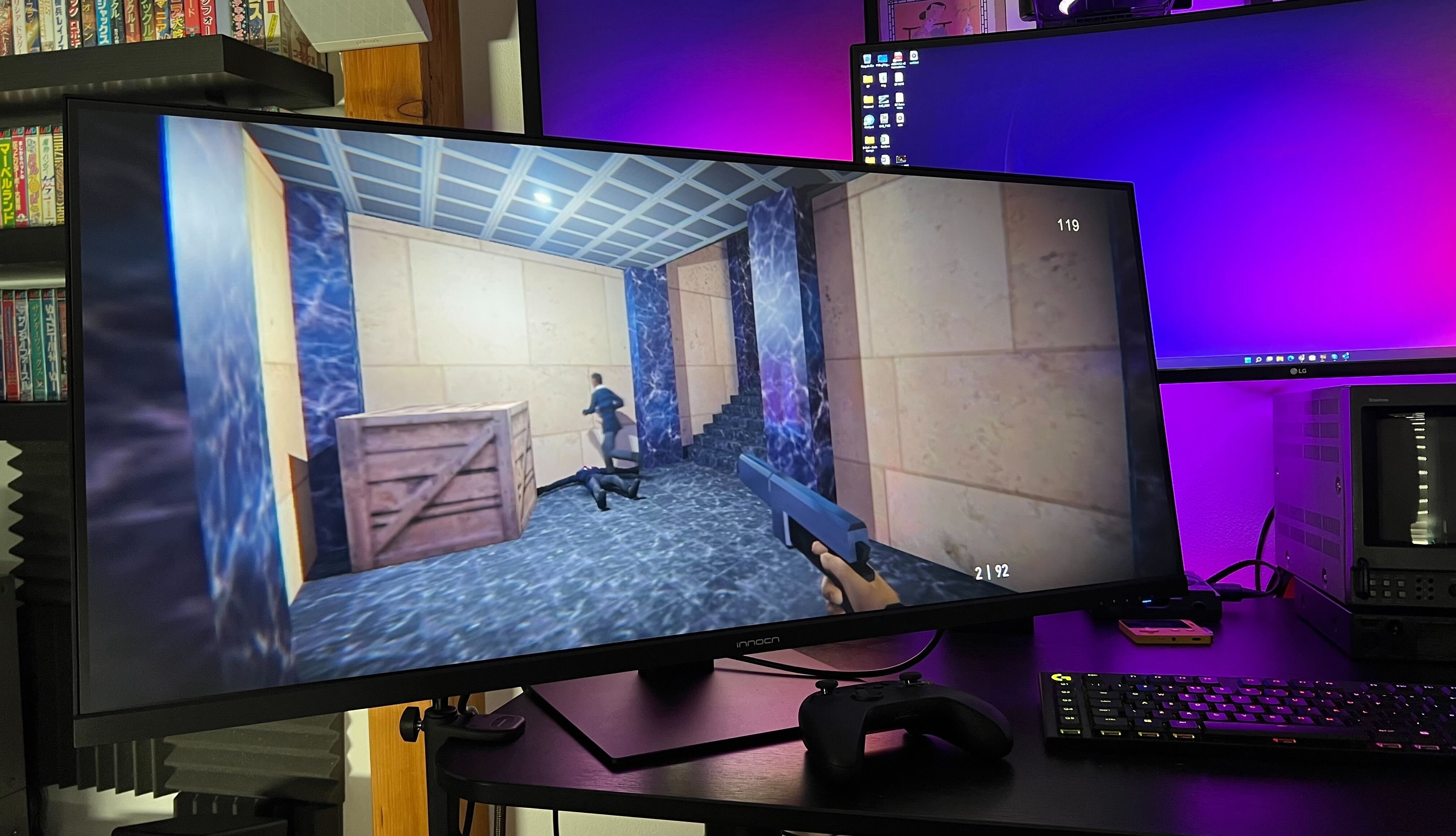 The Innocn 40C1R is a 40-inch ultra-wide monitor with an IPS-like panel, AMD Freesync Premium, and a 144Hz refresh rate — all standard stuff, right? What makes this monitor unique, however, is its form factor: the 40C1R is completely flat, making it a tempting alternative for those who don’t appreciate the curved displays that are so characteristic of modern ultrawides. You don’t pay a premium for this either, with the 40C1R being surprisingly affordable given its titanic proportions: $600 is the list price, while the price drops to $480 or less during the sale.

I first came across Innocn earlier this year when I sampled one of their portable OLED monitors – which I found offered a nice combination of portability and picture quality with all the benefits of OLED technology. The 40C1R isn’t an OLED display and I’m not a big fan of LCD technology so I was skeptical, but thought I’d see how it compares to my own LG 38GN950 monitor of a similar size and whether it’s a suitable choice. is for PC gamers looking for a large panel at a decent price.

Once you unpack the 40C1R, the first thing you notice is its understated design. Devoid of the typical gaudy gaming-oriented elements so common in PC monitors, the 40C1R is understated with a modest, thin black bezel, a sleek rectangular stand, and a small lip that runs along the bottom of the frame and where the controls are located. located. It’s a nice looking monitor that would look good on just about any desk – well, any desk that can handle its size, at least.

The rear panel contains multiple inputs tucked under the chassis: a pair of HDMI 2.0 inputs (up to 3440×1440 at 100Hz), a DisplayPort 1.4 connector (3440×1440 at 144Hz), a USB-C port that allows video input ( max. 60Hz) and a 3.5mm audio jack. The back of the panel is otherwise blank with a 100×100 VESA mount if you prefer to mount your monitors on an arm. The included stand allows for height and tilt adjustment and is equally understated – just a heavy square plate that complements the monitor’s design.

The menu system is fairly robust with options to adjust the response time, enable Adaptive Sync, adjust the picture settings and enable features such as a refresh rate monitor and a crosshair overlay. Menu navigation is handled via a collection of four buttons on the bottom of the monitor bezel – it’s functional if not particularly intuitive compared to the microstick on my LG monitor. Once configured correctly, however, you don’t have to spend a lot of time tweaking settings – something we’ll discuss shortly.

However, what really sets this monitor apart from the usual offerings is its size and form factor. The 40C1R is completely flat and comes at 40 inches, making it an unusual display. Most ultra-wide monitors opt for a soft curve to better focus the eyes, but Innocn uses a completely flat IPS ADS panel in this monitor instead. Whether this works for you will depend on your viewing distance – on a larger desk the presence is welcome, but if you prefer to sit closer to your monitor the size can feel overwhelming. This is an important point to keep in mind when monitoring shopping.

The big question then is one of performance and there are several key areas I define panel quality – resolution, motion brightness, panel brightness, color accuracy and contrast.

Let’s start with the choice of resolution which in this case is 3440×1440. This is a common choice typically used in 34-inch ultra-wide monitors, but when expanded to 40 inches, the pixel density feels slightly inadequate for desktop use. This monitor delivers a pixel density of approximately 93 pixels per inch – equivalent to a 32-inch 16:9 1440p monitor. You’ll find that most modern PC games support this resolution, while the reduced pixel count compared to 4K makes it much easier for even a mid-range GPU to drive. In that sense, while I prefer a higher resolution for productivity, 3440×1440 can be considered a sweet spot when it comes to PC gaming.

When starting up the monitor for the first time, I recommend that you immediately open the settings and make changes. The default gamma curve and color temperature are both higher than I would recommend at a cold color temperature and too dark colors. First impressions weren’t particularly positive, but you can never judge a monitor by its default settings. It is possible to do a full calibration, if you have the hardware, but the sRGB option available under the ‘professional’ menu delivers a vastly improved picture right away. The gamma curve is now more accurate and color temperature less cold, closer to the D65 white point.

As for brightness, the default SRGB mode produces a measured 231 nits, but raising the brightness slider to 100 on a completely white background increases this to a maximum of ~380 nits. By the way, I did measurements with an X-Rite i1Display Pro. The panel is more than bright enough for SDR content and desktop use, and while it may not be as vibrant as my LG 38GN950, it’s surprisingly close overall with decent contrast and strong color reproduction. Unfortunately, this poses a problem for HDR, as the monitor with an estimated 400 nits of HDR brightness and lack of local dimming doesn’t deliver impactful HDR – I recommend sticking with SDR instead.

Crucially, horizontal viewing angles are sufficient with relatively even brightness and color reproduction in the corners of the image when looking straight at it. This is critical for a large edge-lit panel like the 40C1R, but there’s one caveat: vertical brightness shift is apparent to some degree. While this isn’t a problem if the height is properly adjusted for your setup, you may notice it when you look slightly above or below the center of the monitor.

Overall, though, the image quality is impressive when you consider the underlying technology and price. A large format monitor that delivers superior image quality provides a significant premium over the 40C1R.

Next, let’s talk about gaming performance and resolution support, which is of course the main reason for choosing a monitor like this. Using DisplayPort, the monitor allows a refresh rate of up to 144 Hz at 3440 x 1440, but the monitor also supports down-sampling of higher resolutions. For example, if you select full 3840×2160 at 120 Hz, the monitor can display this resolution in a correct 16:9 downsampled window. Using the native pixel grid means the 40C1R can become a 32-inch 1440p monitor if your input source doesn’t support ultra-wide resolutions.

More importantly, this monitor supports up to 2560×1440 120Hz over HDMI, which is useful for Xbox Series X and PS5; the latter worked fine at 1440p60 and 1440p120 in both SDR and HDR. Oddly enough, the monitor can stretch the image to fill the 21:9 panel, resulting in an incorrect aspect ratio. Dive into the options menu and you’ll see that the aspect ratio adjustment option is gray – and to fix this you’ll need to disable Adaptive Sync in the monitor’s menu, which restores the correct 16:9 aspect ratio with black bars on the left and right. This is frustrating if you plan on using this screen with a games console as both Series X and PS5 now support VRR and it could be a godsend in some games.

In terms of motion clarity, this panel exhibits the typical persistent motion blur seen in all sample-and-hold displays. Within the menu there are four response time options: off, normal, fast and ultra fast. However, in my testing, I found the difference between the two to be somewhat negligible. Overshoot isn’t a big deal even with ultra-fast moves, but motion clarity is still limited. That said, the actual pixel response time is much fast and comparable to other LCDs, it should be noted, so it’s no worse than the competition in that regard. My main problem is that there is no motion blur reduction technology available at all. Strobe or inserting a black frame would have saved the day in this case, but it is not available. At higher frame rates, this may be less of an issue, but it’s the only major caveat. Of course, my LG monitor also lacks this feature, and it seems to be relatively rare on large-format PC screens, which is a shame. Thankfully, you still get a responsive gaming experience thanks to the monitor’s low input latency, which I measured at a very reasonable 8ms at 60Hz. I tested this using the Black Dog Technology Time Sleuth Display Lag Tester which relies on HDMI output, but Display Port seems to produce similar results based on the same content over both HDMI and Display Port.

Finally, this monitor also offers video input over USB-C, which is welcome, but this has its own caveat – the monitor is limited to 60Hz over USB-C. I also tested the different picture-in-picture modes, which let you input two sources at once and arrange the screen the way you want. Theoretically, you could hook up two game consoles and enjoy some split screen action in games that normally don’t have this option, and of course the ultra-wide format makes this very possible.

It’s hard to argue with a monitor like the 40C1R, at least in terms of value proposition. The large-format design, feature set and overall picture quality are impressive when you consider the current price of $480. For most users looking for a larger monitor, this is a fantastic option that I can wholeheartedly recommend. Most of my screen issues are an issue inherent in LCD technology, but it’s not like there are many other options on the market. However, for most users, the 40C1R is a solid choice that’s perfect for a high-performance gaming PC and still excellent for modern game consoles. Well worth a look!