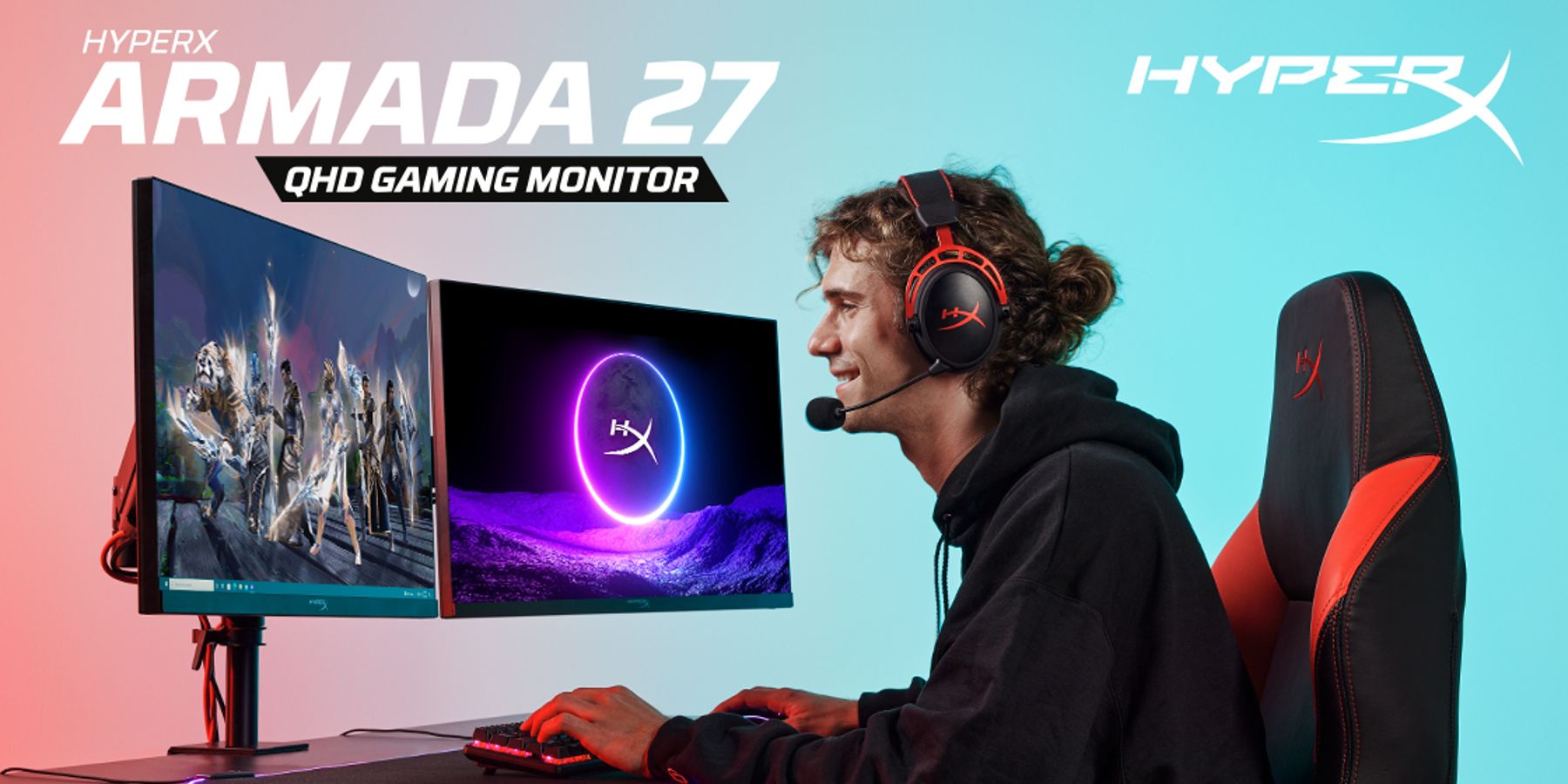 When choosing a monitor for the perfect gaming setup, there are countless options available. Smaller desk monitors and large-scale televisions can both be used to display PC and console output, so any brand looking to attract new customers needs a strong selling point. For the HyperX Armada 27 Gaming Monitorconvenience is an important element in the way owners want to set up their play space.

HyperX began life as a gaming subsidiary for Kingston Technology Company before HP announced it would buy the brand in February 2021 for $425 million. As with other peripheral developers, HyperX creates a range of products, including headsets, keyboards, mice and charging stations, but the Armada lineup announced on August 24 is the first step into the monitor market. The $499.99 HyperX Armada 27 is larger and more powerful than the Armada 25 model, which is priced $50 lower. But both are advertised with the addition of a desk mount that is the star of the show, allowing users to adjust their free-floating Armada monitors — and similar devices — to their liking.

Technically, the capabilities of the HyperX Armada 27 are as strong as one would expect from a new peripheral released in 2022. It has a native 2560×1440 QHD resolution, adding fidelity to the 1920×1080 FHD resolution of the Armada 25 (which is why the Armada 27 has a lower maximum refresh rate at 165Hz compared to 240Hz of its lower cousin). It’s hard to say casual observers would be able to tell the difference, though both monitors are also compatible with Nvidia’s G-Sync technology to boost performance.

One thing that users will notice is how well the Armada 27 displays colors. The default settings are vibrant and especially effective when playing games that thrive in their colorful environments, such as Epic Games’ Fortnite. As with most modern devices, users can easily access a menu via a button on the right back of the monitor. Here they can tweak finite settings, whether it’s toggling a few color presets like “warm,” “cool,” “gaming,” and “cinema,” or entering RGB levels and details like brightness or contrast.

These impressive images complement the amount of screen real estate users receive. The HyperX Armada 27 easily fits into four windows without losing access to text details, and this 16:9 screen displays the large, dramatic landscapes in a game like Santa Monica Studios god of war (2018) wonderful. With a display port and two HDMI ports available, users can switch between inputs from their PC and consoles such as the PlayStation 5 and Nintendo Switch via the menu button. HyperX’s tech specs also offer a 1ms GtG response time with OD active, which should benefit any active device.

One of the few problems a user can have with the Armada 27 is adjusting to its shape. Monitors such as the Acer Nitro XZ322QU are curved and form a concave screen intended to wrap around the user’s eyes for greater immersion. The HyperX Armada 27 is flat with a 178-degree viewing angle, but the screen is large enough to give the illusion of being convex. Users may get used to this over time, but you may have to slide a window from the right to the left of the screen to make it easier for outside observers to read a document.

Fortunately, the benefits of HyperX’s Armada Gaming Mount help alleviate this problem. The Armada 27 comes with a single holder that fits two of its ergonomic arms at the same time. Each arm protrudes relatively far from the holder, which can make it difficult for some to find a comfortable space when their desks are cluttered with appliances and other knick-knacks. But it also has a 180-degree swivel range, can lift up to about 31.2cm and rotate 90 degrees on the hinge, so there’s room to experiment. All in all, the Armada Mount and a single Armada 27 monitor weigh less than 20 pounds, making it fairly portable too.

Users who really want to invest in their gaming space can also purchase the Armada Gaming Mount add-on, which can display more than four 25-inch monitors at once (although each mount only supports about 20 pounds of weight, according to HyperX). The single mount will be available separately from the HyperX monitors for $109.99, while the add-on is $79.99. While the collective pack has a “quick-release system” to disconnect a HyperX monitor, the arm is compatible with “most screens with VESA 75mm and 100mm cartridges.”

The benefits of this system should be obvious, giving users the choice between a single hanging screen or a multi-device wall with deformable screen placement – the option to align multiple devices is even included under the “Gaming” menu tab which is introduced for the first time. appears when fiddling with the rear button. Due to the adjustable nature of the arm, users can even keep their gaming display separate while the HyperX Armada 27 is flipped over to present a vertical screen. Streamers in particular may be interested in an Armada 27 to keep their Twitch or Discord chat logs on a large and colorful canvas.

Whether the free nature of HyperX’s Armada Gaming Mount will be worth a $499.99 investment in a company’s first large monitor is up to any potential buyer. However, the more expensive Armada 27 certainly seems to offer technical specs that are up to snuff with modern sensibilities, and the ease of use with the accompanying branded mount will work wonders for those who just want to set it up and forget about it. It looks like HyperX is preparing to make a splash despite the crowded market it is entering.

The HyperX Armada 27 Gaming Monitor will be released in September 2022 for $499.99. Game Rant got a unit for this rating.