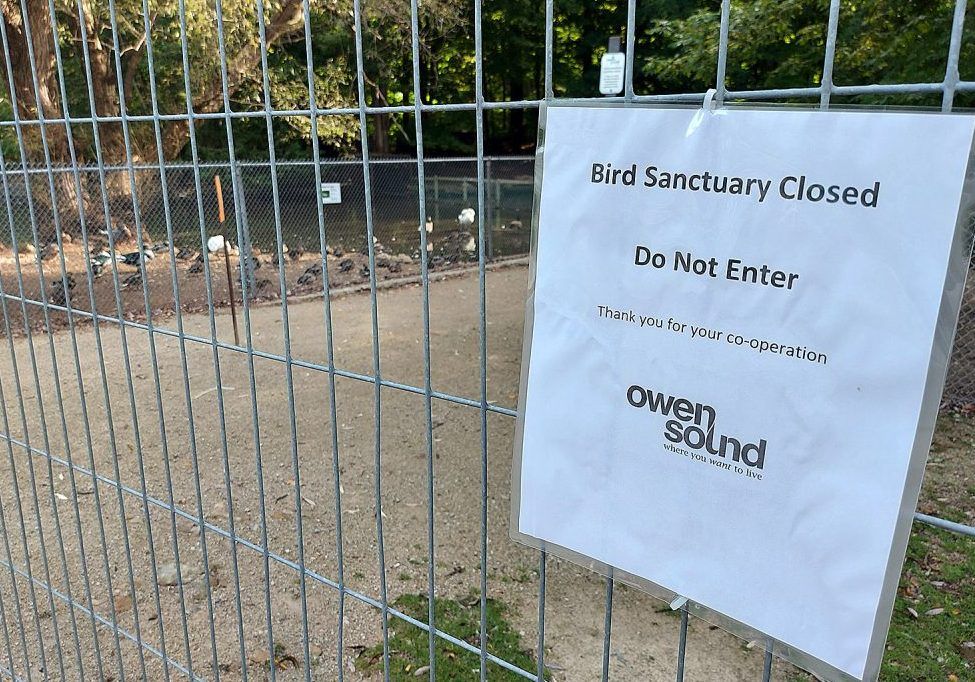 Avian flu has been confirmed in domestic birds at the shelter in Harrison Park and it has been quarantined.

On the advice of the CFIA, a fence has been placed around the reserve to eliminate public contact with the domesticated birds there. The sanctuary has been quarantined.

City manager of parks and open spaces Adam Parsons said on Tuesday morning that several birds in the park had died as a result of the virus, including some geese and a duck.

Birds have been kept in the park since 1921 and currently there are about 50 domestic birds, including about 30 ducks, geese and swans outdoors and about 20 ornamental birds such as peacocks and pheasants in indoor enclosures.

So far, no swans or ornamental birds have died and appear to be unaffected, Parsons said.

“The swans we track a few times a day and they seem unaffected,” Parsons said.

“Waterfowl are generally more resistant. Since swans are naturally present in our environment, they seem to have a resistance to it and we really hope our swans continue to show that.”

The CFIA has responded to cases of H5N1 highly pathogenic avian influenza in farmed birds across the country. Since late 2021, new cases of the virus have spread around the world, leading to bird deaths and the culling of several million poultry and egg-producing birds in Canada. It can cause serious illness in humans and can be spread to humans through direct contact with sick birds, contact with contaminated materials, eating infected birds, and in rare cases coming into direct contact with a sick person.

Symptoms in poultry can be mild, including ruffled feathers and reduced egg production, to severe, leading to complete death of a flock within 48 hours of infection.

Parsons said they first noticed the symptoms in the park on Friday, contacted their local vet and it was quickly determined that the CFIA should be contacted. The CFIA visited the park, did an inspection and on their advice the city put up the fence.

Parsons said by the time symptoms appear in the birds, they can die within a few hours. The symptoms they have experienced in the birds include tremors and difficulty holding their heads up.

Parsons said they have worked with a CFIA vet and unfortunately no treatment is recommended for the birds once infected with the virus.

The virus can infect several types of food-producing birds, such as chickens, turkeys, quail and guinea fowl, as well as domestic and wild birds. There is no evidence that eating cooked poultry or eggs can transmit the virus to humans.

City staff will continue to work with and take charge of the CFIA in managing the disease outbreak in the park. Key personnel have received additional information, training and PPE and are continuing with basic bird care.

“We are still in contact with the CFIA and they support us,” Parsons said. “They were an excellent organization to work with as this situation developed.”

While the CFIA mandate does not include wild bird testing, Parsons said some wild birds have also been found dead in the sanctuary’s open area. He said they are doing their best to keep the wild birds separate from the domesticated ones, but the size and location of the terrain among the trees in the park makes it difficult.

Parsons said staff have yet to report any signs of the virus in wild birds elsewhere in the city.

Anyone who finds a dead wild bird is encouraged to contact the Canadian Wildlife Health Co-operative, which can be done through its website at cwhc-rcsf.ca

Other recommended measures to help prevent the spread of the virus include not touching or feeding wild birds by hand, regularly cleaning feeders and bathing in the backyard with a weak solution of household bleach and water, and separating domestic and wild birds.