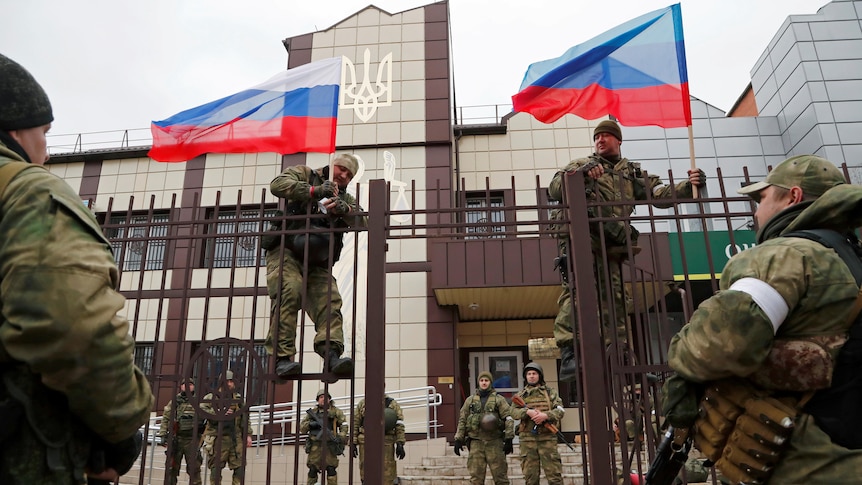 Russia has backed plans by separatists it backs in Ukraine to hold referendums, paving the way for the annexation of parts of additional territory in a direct challenge to the West that could greatly escalate the conflict.

After nearly seven months of war, including a critical defeat on the battlefield in northeastern Ukraine, Russian President Vladimir Putin is pondering his next steps.

Russian officials portrayed the move as one that would give Moscow a claim to territory it could defend by any means necessary, but Ukraine has dismissed it as a stunt by Russia to try to reclaim the initiative after crushing losses on the battlefield.

“Russia is and remains an aggressor that illegally occupies parts of Ukrainian land.

“Ukraine has every right to liberate its territories and will continue to liberate them no matter what Russia has to say.”

“The occupiers are clearly in a panic,” Ukrainian President Volodymyr Zelenskyy said in a televised overnight address.

In what appeared to be choreographed requests, Russian-backed officials across 15 percent of Ukrainian territory — an area roughly the size of Hungary or Portugal — lined up to request referendums on Russia joining.

The self-proclaimed Donetsk (DPR) and Luhansk People’s Republics (LPR) in eastern Ukraine, which Mr Putin recognized as independent territories days before the invasion, and the Kherson and Zaporizhzhya regions have all called for separate votes within 24 hours.

Officials from Luhansk, Donetsk and Kherson said the referendums would take place in just a few days – from Friday, September 23 to Monday, September 27.

Russia does not fully control any of the four regions, with only about 60 percent of the Donetsk region in Russian hands.

Asked about the referenda, Russian Foreign Minister Sergei Lavrov said: “From the very beginning of the operation … we said that the peoples of the respective territories should determine their fate, and the whole current situation confirms that they master want to be about their fate.”

If Moscow formally annexed an additional large portion of Ukraine, Putin would essentially challenge the United States and its European allies to risk a direct military confrontation with Russia, the world’s largest nuclear power.

“All this talk of immediate referenda is an absolutely unequivocal ultimatum from Russia to Ukraine and the West,” said Tatiana Stanovaya, founder of the political analysis firm R Politik.

Dmitry Medvedev, who served as Russian president from 2008 to 2012 and is now deputy chairman of the Russian Security Council, backed the referendums, which he believes would change the path of Russian history and give the Kremlin more options to defend what he said. . become Russian territory.

“Entering Russian territory is a crime where you can use all the forces of self-defense,” Medvedev said in a Telegram message.

“This is why these referendums are so feared in Kiev and the West.

“It is equally important that after the amendment of the constitution of our state, no future leader of Russia, no official will be able to reverse these decisions.”

Russian nuclear doctrine permits the use of such weapons if weapons of mass destruction are used against them or if the Russian state is threatened by conventional weapons.

Vyacheslav Volodin, the speaker of Russia’s lower house of parliament, the State Duma, said he would support the annexation of parts of Ukraine that voted to join Russia.

“This is what the fear of defeat looks like,” said Andriy Yermak, chief of staff to Ukrainian President Volodymyr Zelenskyy.

“The enemy is afraid and darkens primitive.”

“Ukraine will resolve the Russian issue. The threat can only be eliminated by force.”

Ukraine says it will not rest until every Russian soldier is driven from its territory.

Kiev says it will never accept Russian control of its territory and has called on the West to provide more weapons for its fight against Russian forces.

Sullivan said Moscow may be taking the step to recruit troops in those areas after suffering major losses on the battlefield, calling the referenda an affront to the principles of sovereignty and territorial integrity.

He said that President Joe Biden, during his speech at the United Nations General Assembly on Wednesday, will give Russia a “firm rebuke” for its war against Ukraine.

“If this does happen, the United States will never recognize Russia’s claims to supposedly annexed parts of Ukraine,” Sullivan said.

“We will never recognize this area as anything but part of Ukraine. We unequivocally reject Russia’s actions.”

French President Emmanuel Macron said the proposed referendums will not be recognized by the international community.

In New York, he said the referendum proposals for eastern Ukraine were an additional provocation after the Russian invasion of his neighbor.

“If the idea of ​​the Donbas referendum wasn’t so tragic, it would be funny,” he said.

Polish President Andrzej Duda said his country would align with the US and France by not recognizing the results of the referendums.

“[The referendums] are worth nothing – the truth is that the result is decided in the Kremlin and not by voting,” said Duda.

Russia and the West

US President Joe Biden warned in March that a direct confrontation between NATO’s military alliance and Russia would mean World War III.

Biden and NATO leaders have cautiously said they do not want NATO troops to come into direct conflict with Russian forces.

However, Mr Putin and senior Russian generals and officials are already framing the conflict as a broader contest with the West, which they say has sent Ukraine advanced weapons and aided Ukrainian forces with intelligence and training that ultimately kill Russian troops.

On Friday, Putin brushed off the lightning-fast Ukrainian counter-offensive of recent weeks, framing the conflict as an attempt to prevent what he believed to be a Western plot to split and destroy Russia.

Russia’s parliament on Tuesday approved a bill to tighten penalties for a range of crimes, including desertion, damage to military property and insubordination, if committed during military mobilization or combat situations.

The conflict in eastern Ukraine began in 2014 after a pro-Russian president was overthrown during the Maidan revolution in Ukraine and Russia annexed Crimea, while Russian-backed separatists in the Donbas – which consists of Donetsk and Luhansk – tried to escape. control of Kyiv.

Russian forces took control of Crimea, which has an ethical Russian majority and was transferred to Ukraine during Soviet times, on February 27, 2014 and held a referendum 17 days later to join Russia.

Crimea’s leaders declared their split from Ukraine with 97 percent of the vote, with Russia formally adding Crimea on March 21.

Kiev and the West said the referendum violated Ukraine’s constitution and international law.