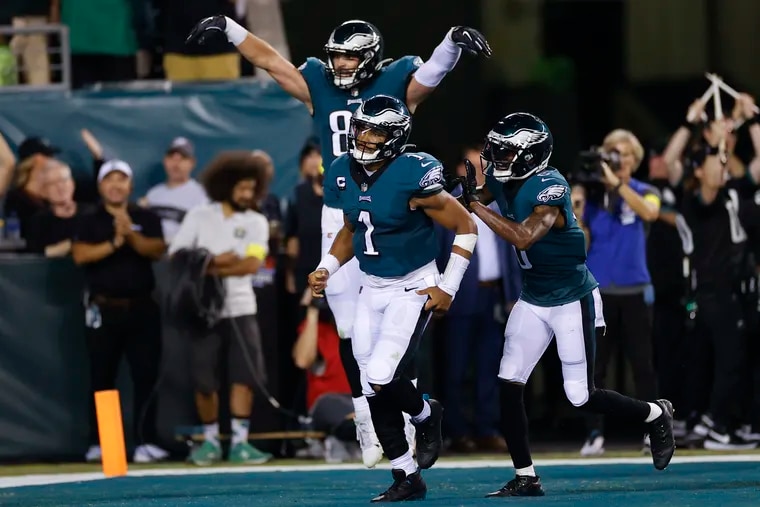 The Eagles took a statement win on Monday night.

They got off to a hot start and carried it to a 24-7 win over the Minnesota Vikings to move up to 2-0 on the year. It was one of two games scheduled for week 2 prime-time slots, and the Eagles rose to the occasion to play their home opener on national television.

The offense looked explosive, thanks in large part to Jalen Hurts’ great play, and the defense recovered from a shaky performance against Detroit in Week 1 to dominate a talented Vikings charge.

Here’s our instant analysis of the win:

Some of the biggest questions going into the season were Hurts.

By Monday night, the young quarterback had all the answers.

Hurts was almost perfect in the first half – to call it the best half of his career might be an understatement. He completed 17 of 20 passes at halftime and flashed out the type of anticipation, accuracy and decisiveness that will determine if he is the answer to position for the Eagles in the long run.

“It was a great performance from him,” Eagles coach Nick Sirianni said after the game. “Of course in the run game and in the pass game. Great run – both his touchdown runs were excellent runs. … Great performance on a big stage.”

Even on two of his three unfinished first halves, Hurts made good decisions and put the ball where it needed to be. One was a high pass to Dallas Goedert on a groundbreaking route as Goedert got both hands on the ball before it was unhinged on an impressive play from Vikings cornerback Cameron Dantzler. The other was a pass to AJ Brown that was knocked down slightly when Brown pressed with a Vikings defensive back.

The completions were even more impressive for Hurts, who finished 26-for-31 for 333 yards, one touchdown and one interception bouncing on the hands of Kenneth Gainwell. He hit passes the field to multiple receivers. He focused on all areas of the field, including the intermediate midsection that he has consistently avoided for most of his career.

“To come forward here as a team and perform at a high level, that’s big for us,” said Hurts. “… A hellish game tonight, but there is still a lot to learn.”

Against Detroit, Hurts played well against a blitz-heavy plan that used mostly man cover. The Vikings were almost the exact opposite and although Minnesota had its share of defensive abuses, Hurts thrived nonetheless.

Sirianni and offensive coordinator Shane Steichen both deserve credit for the script that brought Hurts to life when the offense was 486 yards. It’s also important to note that the Vikings’ schedule is somewhat similar to the Vic Fangio-influenced schedule the Eagles ran during training camp.

It doesn’t change the bottom line: Monday night was a remarkable test for Hurts, and he succeeded.

Eagles defense coordinator Jonathan Gannon and his unit angered fans after a leaky performance against the Lions, but they recovered nicely against the Vikings.

The Eagles largely controlled Minnesota in the first half and rattled two interceptions on back-to-back drives in the third quarter. The first came when Darius Slay interrupted a pass to Justin Jefferson in the end zone. Javon Hargrave had the difference-making pressure, getting in the face of Kirk Cousins ​​and forcing the errant pitch.

The next came on a jumping grab from Avonte Maddox. It was an ill-advised throw from Cousins, but Maddox had to use his full jumping ability to come up with it.

Gannon called out a handful of well-timed blitzes to keep Cousins ​​on their toes. The Eagles barely made any blunders last season, but have become more unpredictable by sending additional rushers early this year.

The Eagles didn’t have significant sack production, but they had more than enough pressure to let Cousins ​​throw most of the second half off his back foot. Fletcher Cox had a strip sack in the fourth quarter and the entire defensive front added pressure as the Vikings became one-dimensional late in the game.

The Eagles held Minnesota at 264 yards in total and forced three turnovers. The tackling was better and the pressure was more consistent. Gannon cooled the heat, at least for now.

“That was an important bounce-back game for us defensively,” said Sirianni. “It was a defensive game for the whole team. We talk about Slay and the work he did on Jefferson, but [also] the coaches who put the boys in the right position, and the salt in the bag that really put the pressure on our front seven. ”

Slay didn’t seem too attached to his first interception ball, and that turned out to be a good reason.

The Eagles cornerback sought James Harden of the 76ers, who was sitting in one of the club’s front row seats at Lincoln Financial Field, to hand him the ball he intercepted.

A quarter later, Slay got one for himself, knocking out Cousins ​​a second time in the end zone midway through the fourth quarter to nearly ruin the game. The Vikings let Josh Sweat come free from the rim in the game and Cousins ​​couldn’t get into the underthrow pass. It was one of the Vikings quarterback’s many misplaced attempts, and the Eagles capitalized on it.

Slay matched Vikings star receiver Jefferson for most of the night, performing admirably against one of the best wideouts in the league. Jefferson had six catches for 48 yards, which pales in comparison to his performance of 184 yards in the Vikings’ 23-7 win over Green Bay in Week 1.

DeVonta Smith and his lack of catches in the season opener was a hot topic the week after the Detroit win.

After seven catches for 80 yards, it’s safe to say Smith’s role on offense will be enough this season. Sirianni and Steichen made it a point to touch Smith early on in the first series, performing the first stretch for him before a brief completion.

Smith had catches on consecutive plays in the second quarter, piling up 35 yards on the games.

“When the ball comes to you, you have to take your chance,” said Smith. “So just go out, we as an attack, execute. Everyone got their chances and everyone made the best of it.”