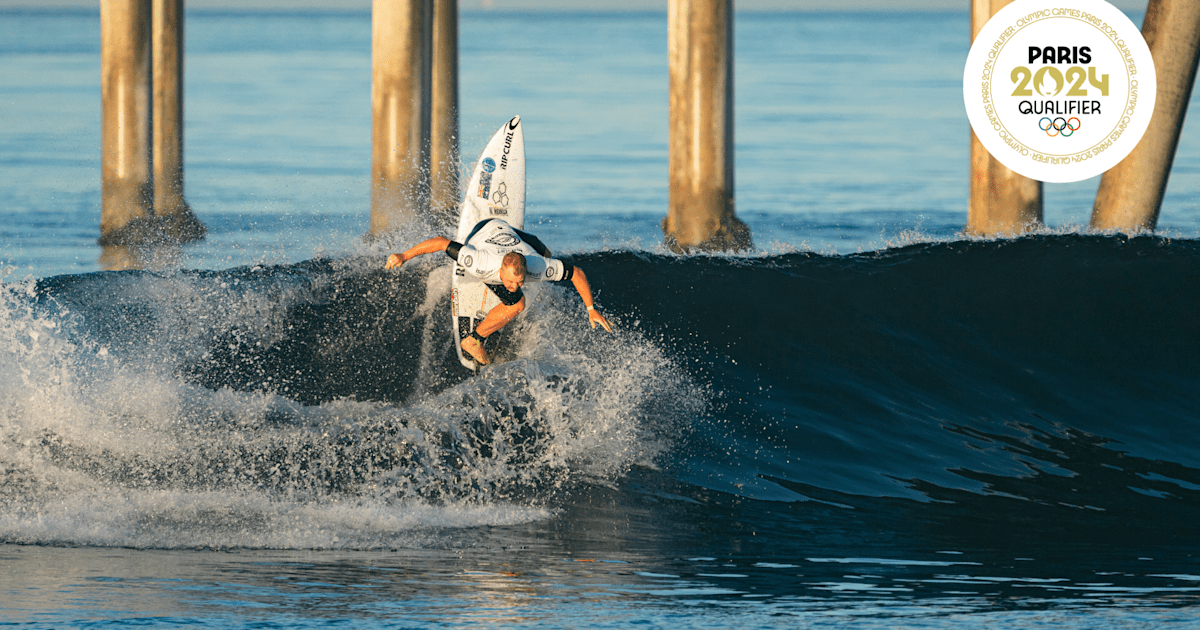 The pressure kicked up a gear on Day 7 at the 2022 ISA World Surfing Games.

Friday (September 23) in Huntington Beach, California took a lot of patience, as waves were few and far between. But when they arrived they did not disappoint.

We’ve seen repeatedly how one wave can make or break a surfer’s day, advance them to the next round, or end their competition.

To add to the drama, we’re getting closer to the first two Paris 2024 quota spots to be awarded.

Heading into the final day of the competition, the US and Indonesia lead the way for the men’s national quota spot, followed by Japan, Portugal and Australia who still have math odds.

For the women’s national team quota spot for the next Olympics, Australia leads the way, closely followed by Portugal. The US, France and Germany are also in the mix but will need big performances and different results to get going.

Read on for the rundown of Friday’s action, watch highlights and full recaps of how Day 7 unfolded, as we paint the picture for Saturday’s final where everything will be decided.

Watch the action live on Olympics.com to see history being made ahead of surfing’s second Olympics.

Time of the day: Baker gives a clinic

Australia’s Jackson Baker was one of the stars of the morning with an incredible performance in the repechage round 10 heat 1.

Against Brazil Miguel Pupo and Indonesia’s Rio Waida, Baker kicked off the heat with an impressive 9.57 run within the first minute.

Three minutes later, he grabbed another solid score with a 6.83 to secure the heat win.

Given the waves on offer, his two waves were well worth the win.

After two semifinals, Team USA, Portugal, Argentina and France were the teams in the final. Each team had two men and two women.

One team member starts the heat for each team and their top two waves count towards the team’s heat total. They run back onto the beach to tag their teammate, who then takes to the surf for their own chance to impress. Each team is allowed a maximum of three waves per athlete.

From the start, France was dominant and they did not relinquish the lead. The next Olympic hosts took the win, followed by team USA in silver. Their continued success is a promising statement as they prepare to host the 2024 Games in Paris.

As It Happened: Day Seven at 2022 ISA World Surfing Games

Bonvalot’s 5.83 score was exactly what she was looking for and was followed by a 3.33 in difficult conditions. Hopkins was given an interference penalty, so her second wave didn’t count. While Fitzgibbons failed to get a second wave, Rosas got the score she needed (3.23, on top of her 1.00) in the closing seconds of the heat to finish second and progress.

For the men, Indonesia’s Ketut And has continued its excellent run. Take on Olympian Kolohe Andino (US) and 2022 WSL rookie of the year Samuel Pupoc (BRA), the 21-year-old held his own and finished second in repechage heat 2, behind Andino, and will continue his run on Saturday.

Saturday is the final day and so much is at stake.

The surf will be similar to what we’ve seen in previous days: small and clean with light morning breezes.

Watch out for Rio Waida and Agus in the men’s repechage 11. The Indonesians will be hungry to keep their hopes of an Olympic quota alive, but will have to overcome an in-form Baker and Andino.

The men’s main round sees Igarashi (JPN), Lucca Machinas (PER), and Nat Young (US) record it Guilherme Fonseca (BY MEANS OF).

The Portuguese has surprised many and is definitely one to keep an eye on.

In the women’s draw, Bonvalot was in good shape, but faces stiff competition from Kirra Pinkerton who is eager to make her mark on Team USA. Pauline Ado (FRA) and Daniella Rosas (PER) should not be underestimated either.

Fitzgibbons and Sophie McCulloch will continue to fight for Australia, while Hopkins will try to keep Portugal’s dream alive, as will Rachel Presti for Germany.

You don’t want to miss the action on Saturday, when the two Olympic quota spots in Paris 2024 are determined. Watch it all live on Olympics.com.