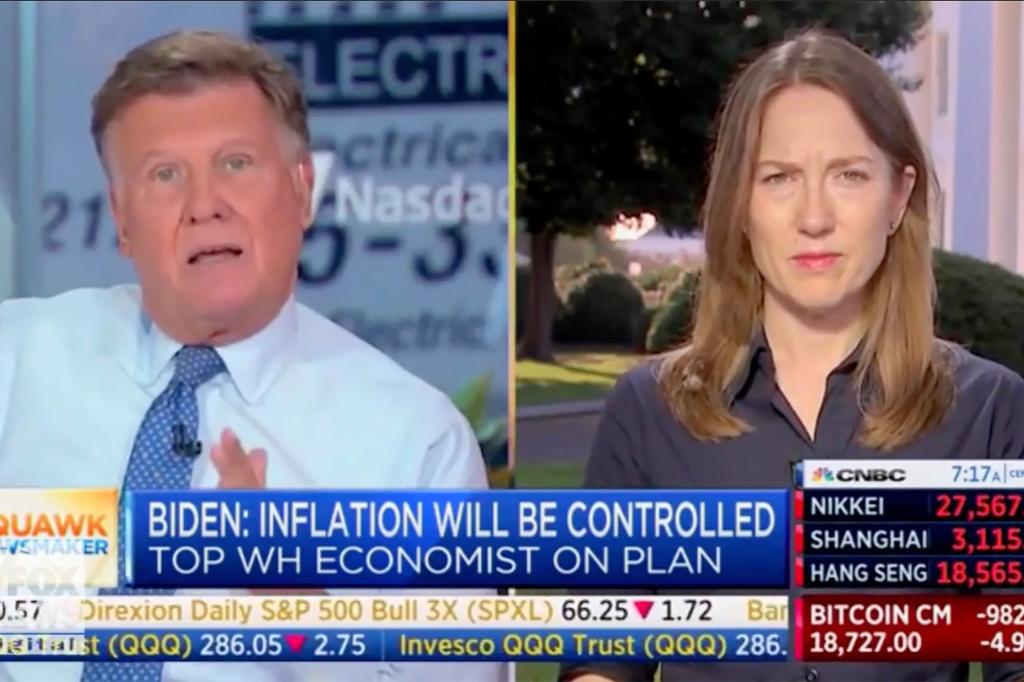 CNBC host Joe Kernen called on Biden’s economic adviser Heather Boushey on Monday during a heated discussion over government messages about the struggling US economy.

The exchange on CNBC’s “Squawk Box” came after Boushey, a member of the White House Council of Economic Advisers, championed the government’s progress in fighting inflation.

“This president has introduced a series of policies that have restored the economy, put it on a better track and returned jobs,” Boushey said. “Under the auspices of the president, we have created nearly 10 million jobs. That is a historic and impressive achievement that has brought people across the country.”

In the same interview, Kernen pointed to signs of lingering problems in the economy as Boushey praised the Biden administration’s progress despite mounting geopolitical tensions.

“The stock market is clearly all these things wrong,” Kernen said. “That’s a nice picture you’ve painted, but it looks like mortgage rates have doubled in the last year, gas prices are probably still up 60%, 70% from where they were before the president took office, inflation is running at 8.3%, 40-year highs.”

“They were two-and-a-half when he took office,” Kernen replied.

The national average price of gas was $3,677 a gallon as of Monday, according to AAA. Prices have fallen steadily since reaching a record high of $5,016 in June, but prices are still much higher than their average cost of $2.39 per gallon when Biden took office.

Boushey echoed the Biden administration’s frequent claim that Russian President Vladimir Putin’s invasion of Ukraine was most responsible for the rise in gas prices.

“We’ve had a geopolitical crisis that has turned the oil markets upside down, which is why the president is so focused on moving us all toward electric vehicles,” she said.

“If you blame inflation for the pandemic, then you have to recognize that the reopening after the pandemic is why we have just returned to the number of jobs we had before the pandemic, which was 10 million. [jobs] has just brought us back on the same level’, Kernen responded.

“We’re putting ourselves on a better path now,” Boushey said.

The exchange came days after Kernen also challenged Transportation Secretary Pete Buttigieg about inflation — he urged the Biden cabinet minister to “be honest” about inflation and other issues facing American households.

When CBS correspondent Scott Pelley mentioned the 8.3% increase, Biden replied that prices had increased “just an inch, barely” compared to the previous month.

Pelley pushed back, noting that inflation was at its highest level in four decades. Again, Biden downplayed the situation.

“I’ve got it. But guess what we are. We’re in a position where it hasn’t risen in recent months,” Biden said. “It’s barely, it’s actually been the same. And in the meantime we have created all those jobs.”

Biden acknowledged that prices “have risen” but noted that they “have fallen for energy”.

“The fact is that we have created 10 million new jobs,” he added.