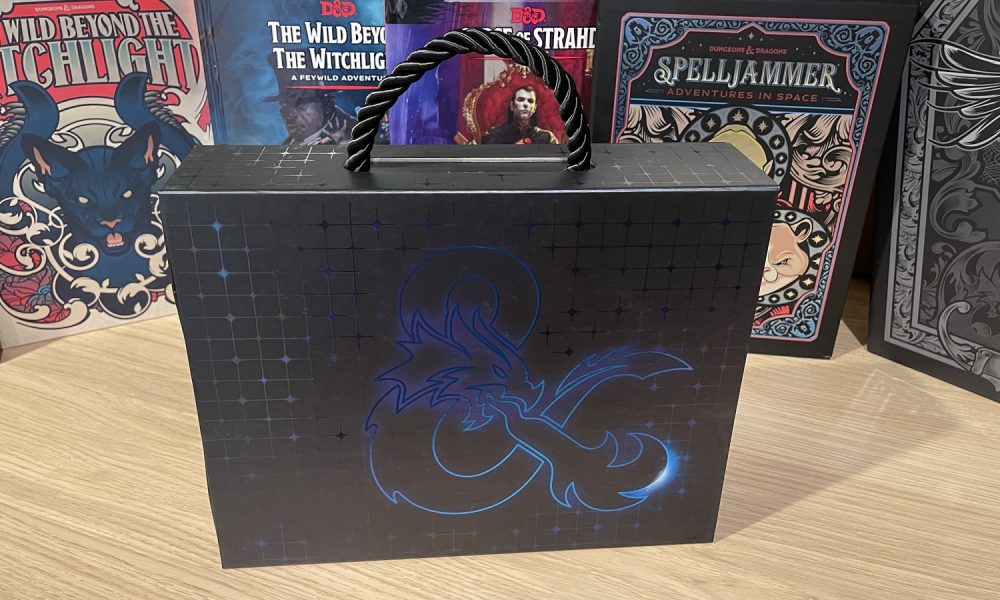 Wizards of the Coast clearly has an eye on making Dungeons & Dragons accessible to new players. They have published a starter set of books, an essential kit, a gift set with core rules and a Stranger Things tie in adventure. You can find these items under the label “Where to start” in the WOTC product catalog on their website. What’s not under that headline, but should be, is the new Campaign Case: Terrain product. This is something that will come in handy for most aspiring DMs. 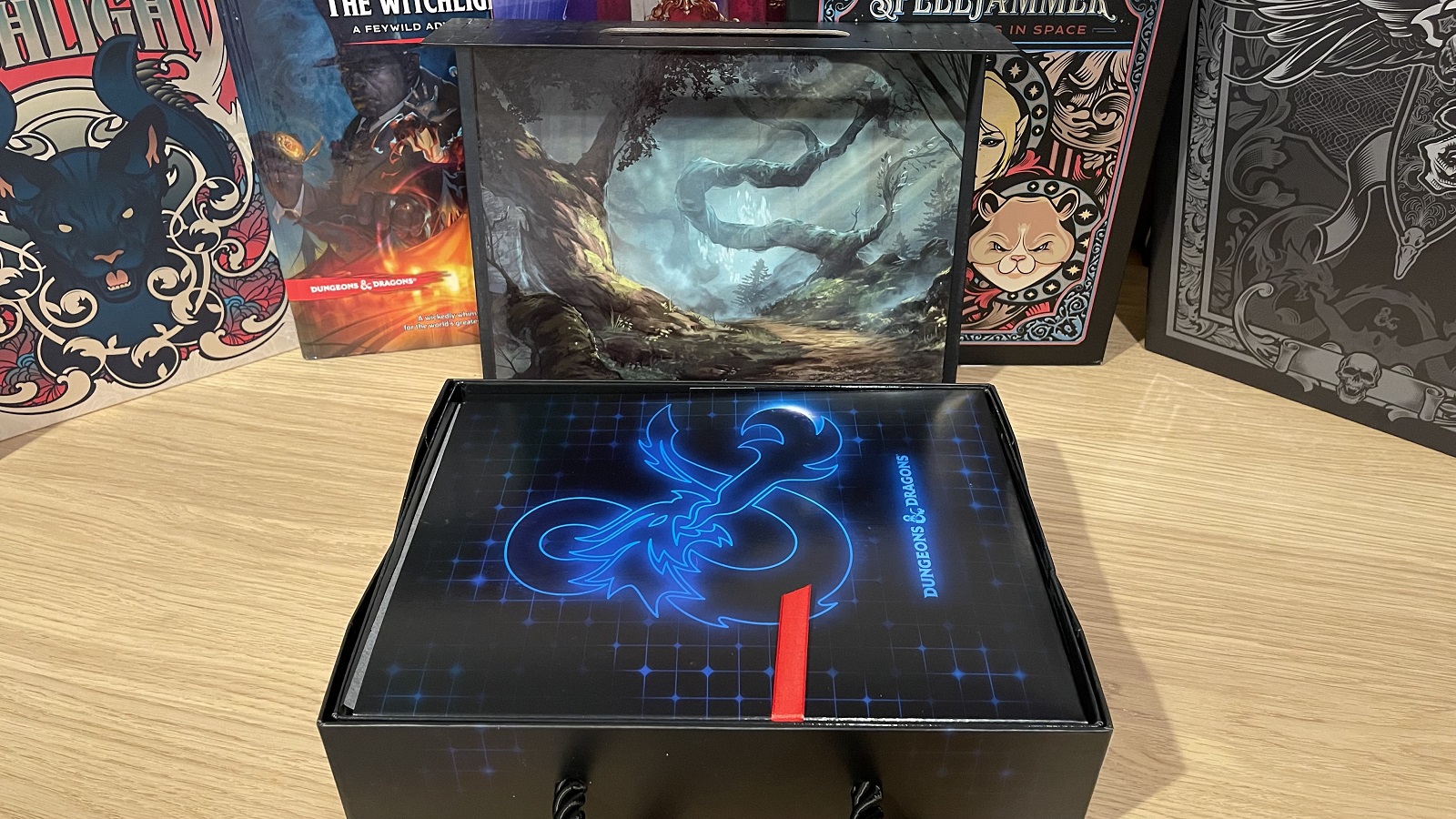 Artwork on the inside of the cover.

The Campaign Case: Terrain is what it sounds like, it’s a case that has terrain in it… sort of. It is a black suitcase, about a foot wide, nine inches long and three inches deep. It is black, with a glossy blue D&D trademark “&” dragon on either side. It has a nice black rope handle and it is held closed by a magnet. When you open it, you’ll find a folder with five sheets of reusable Adventure Clings, a folded cardboard “Adventure Grid” and thirty terrain tiles.

The Adventure Grid is a double-sided 22×25 inch grid with dungeon or wilderness backgrounds. The terrain tiles are interlocking double-sided 5×5 inch terrain tiles with the same wilderness or dungeon background. The Adventure Clings are reusable garments with an assortment of items that you may want to display on a map during an adventure, such as stairwells, barrels, statues and campfires and much more. 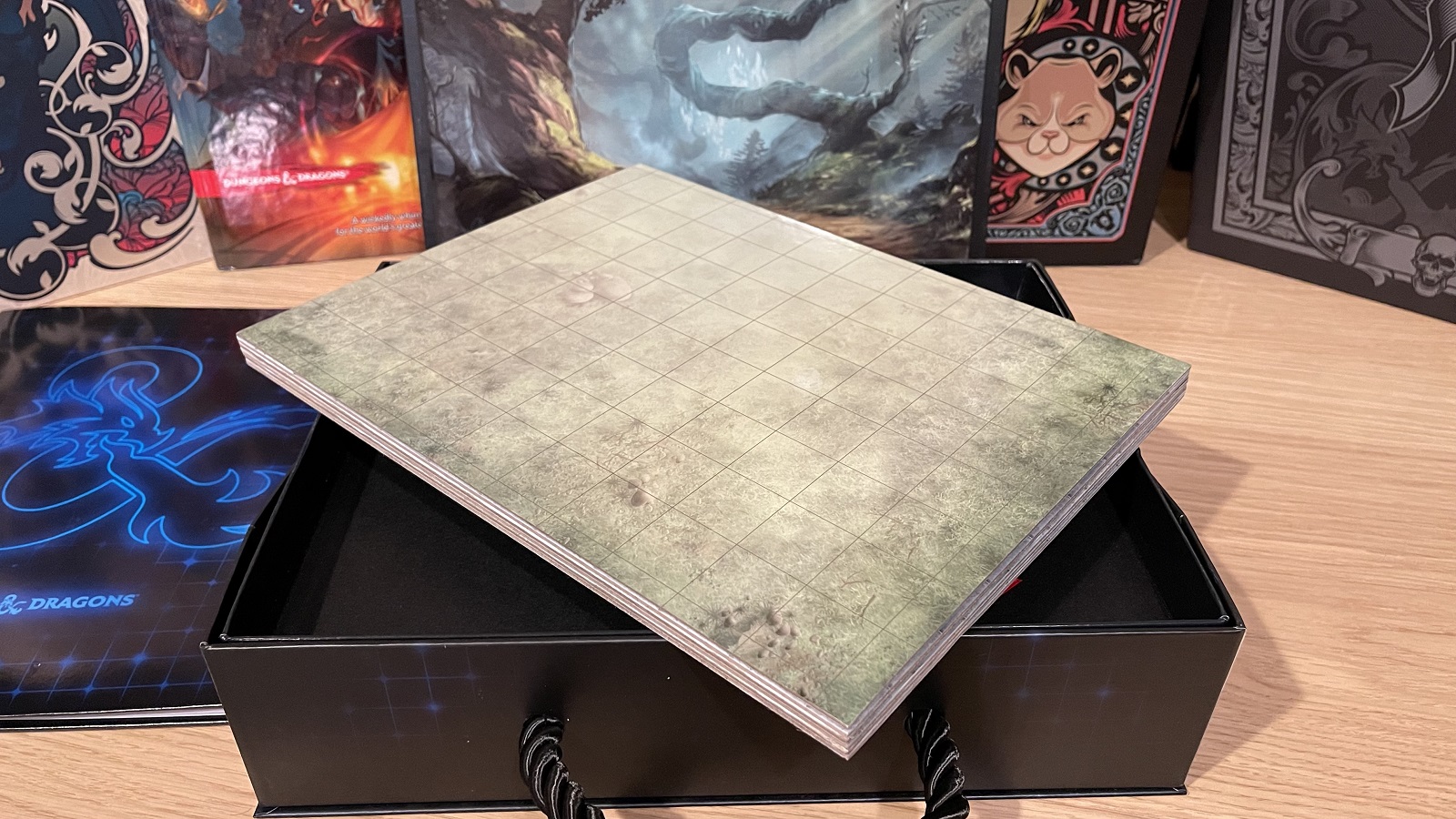 The Adventure Grid folds up to carry.

The Adventure Grid and interlocking tiles have a glossy coating and can be traced over with a dry-erase marker. Dark markings are clearly visible, but lighter markings can be difficult to distinguish against the green or gray background. That makes these terrain pieces perfect for placing on the table and drawing a decor for miniatures or runners to place on. The terrain pieces are identical in shape and background graphics, so they feel pretty redundant. But because they’re square, interlocking pieces, you can lock them together to create a wandering underground passage or forest maze, or a road, which offers more flexibility than the Adventure Grid gives you.

Once you’ve laid out your terrain pieces and drawn your dungeon or whatever scene, you can use the Adventure Clings to spice up the map with top-down perspective dressing. Dozens of objects are depicted on the clogs. Just a few examples are wells, wells, fountains, trees, stairs, rubble, horses, tents, chariots, graves, a cave entrance, a campfire, tables, carpets, coffins, treasure chests, and more. These stickers are just like the ones you might have played with as a kid to put costumes on a cardboard figure, or the kind used as seasonal window decorations. The artwork is good and you can immediately see what most of the objects are. There are a few that should probably be doors, and something that looks a bit like the bottom third of a didgeridoo, but I think it could be a scroll tube. And three dead or maybe unconscious bodies. The clamps work well, although some of the (possible) doors blend in with the background terrain for me. I’m color blind, so I don’t know if that’s an issue for people with normal color vision. 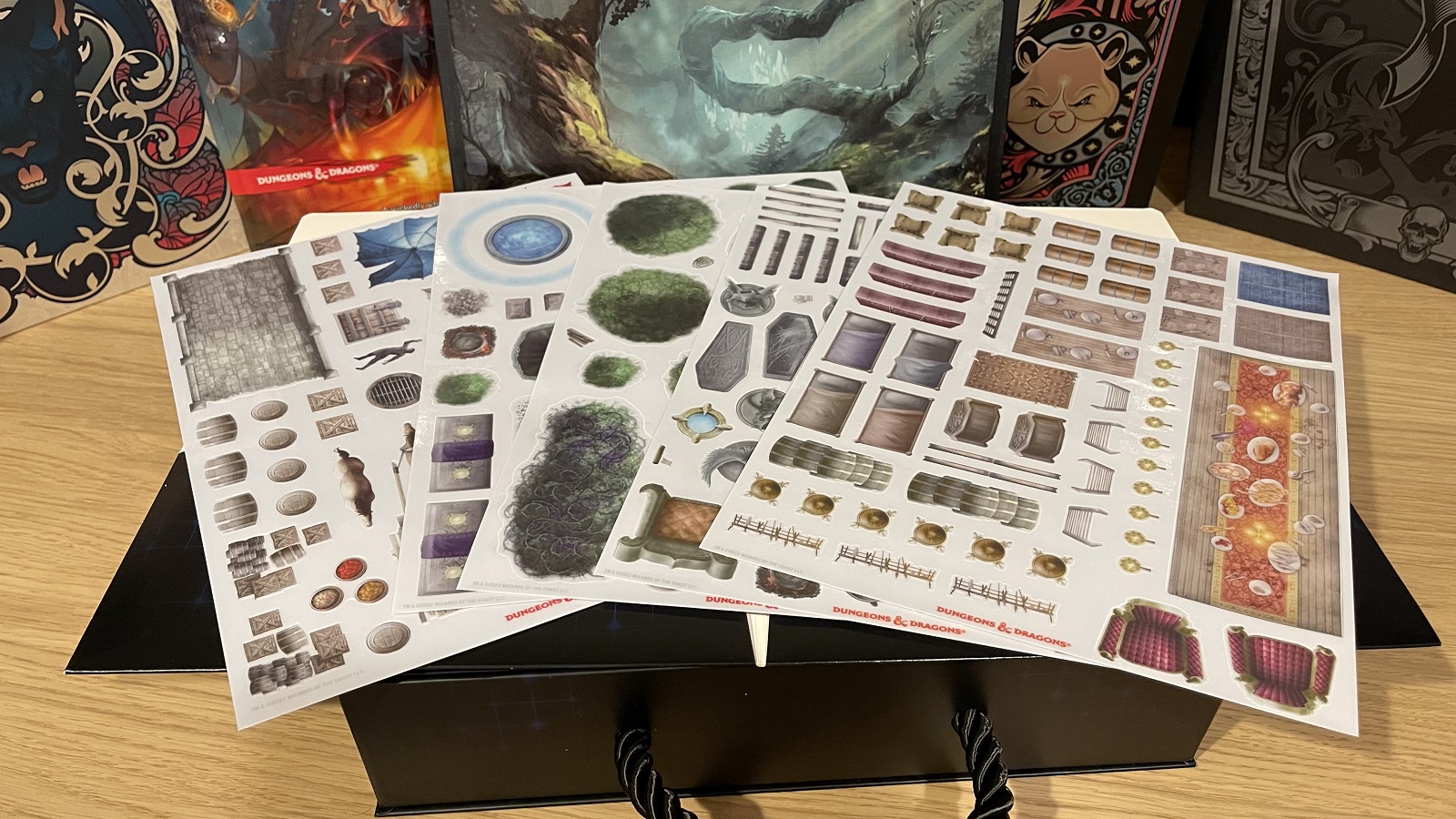 There are four key things to evaluate in this set. The first thing, and my favorite, are the clings. They’re pretty cool, and I think they’re useful too. The five pages here give you dozens of useful and common items to shape a dungeon or wilderness environment. I’d like to see more of these, maybe folders with different themes. I’m concerned that if they are used on cards drawn with erasable markers, they will get dirty and won’t stick to the sheet properly, causing them to get lost.

The second thing is the Adventure Grid, or the large rectangular map. I like this, it’s easy to throw on the table and draw on it. It gives you the option to walk into your friend’s house or your local game spot and start a fight right away. If you don’t already have a grid battle mat, this is a great one to start with. If you already have one, it might still be good for you, especially since it has wilderness and dungeon terrain and supports dry erase. 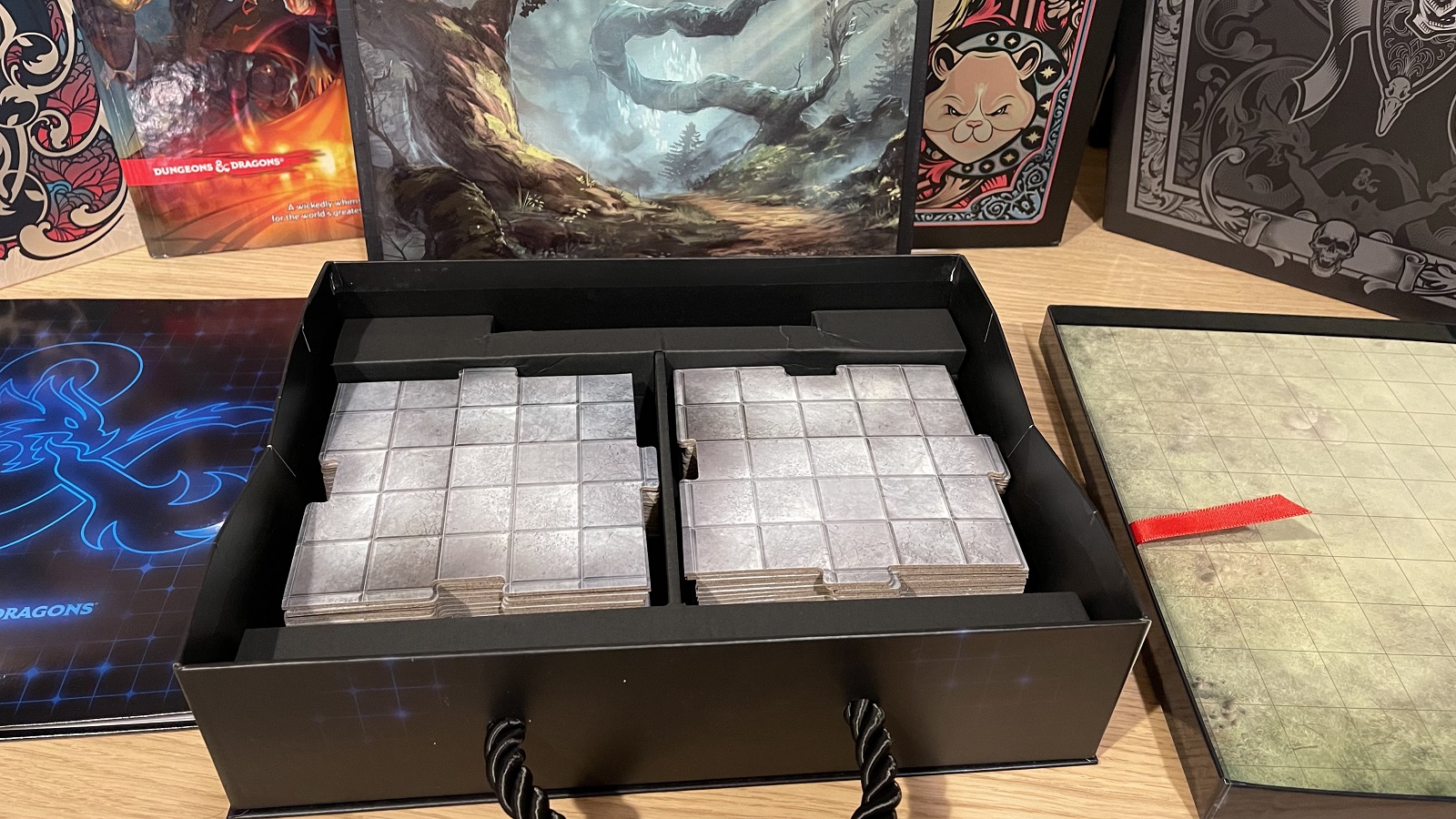 The tiles in the grounds cupboard.

The third thing is the interlocking terrain pieces. I am less enthusiastic about this. They’re pretty redundant in terms of artwork, but I think it avoids issues of uneven alignment along edges. Still, it would have been nice to see a few more patterns in the set. I’m also not sure how necessary it is to have these when they could have just included another Adventure Grid that could be placed against the other to provide a larger area to draw on. Not many tables can accommodate a really long tunnel-style card with ten or more tiles in a row. They may also not be as useful to many DMs as simply throwing on the larger Adventure Grid and drawing on it, rather than composing a windy path with 90-degree angles to draw on. 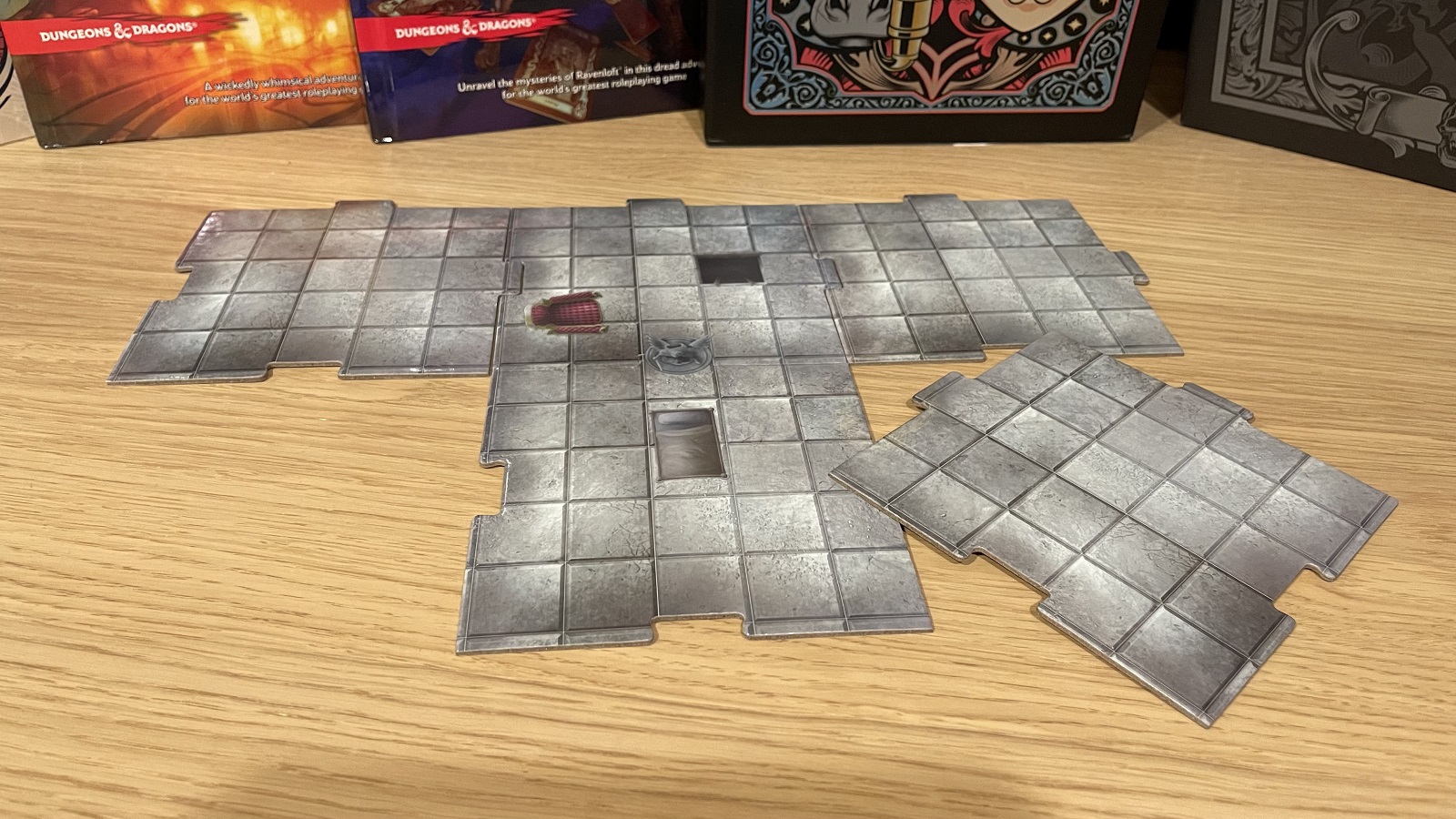 Tiles on the table with some clinging.

The fourth thing is the carrying case, which is sturdy and attractive. One thing I didn’t mention above is the artwork inside. When you open the lid, you are treated to a beautiful picture of a wilderness scene. The image is thematic and embellishes the inside of the case, which is very attractive and convenient. The case has an insert containing the Adventure Grid and folder of adhesives, including a cardboard insert that holds the terrain tiles in place. The cardboard insert is quite flimsy and I’m afraid it won’t withstand a lot of banging, which could be a problem considering the set is presented as your grab-and-go terrain kit.

While the tiles could use a little more variety, and a few of the clings are a little hard to identify, overall this is a great product for a new Dungeon Master. It provides the tabletop accessory you probably need to map out a combat encounter in the wilderness or in a dungeon. The stickers are very useful, especially if you don’t have a large collection of dungeon decorations in the form of cardboard chips or real miniature terrain. For the experienced Dungeon Master, you may not need all the contents of the carrying case, and the carrying case itself isn’t worth buying the whole set.

Steven spends his days working deep in the bowels of a government building and evenings with his wife and daughter. He has worked in and around the US military for the past quarter century. His passion is table games. You can watch him play, talk, read and write about RPGs, wargames, board games, board games and card games. Steven is from Texas but currently lives in Virginia.

See below for our list of partners and affiliates: