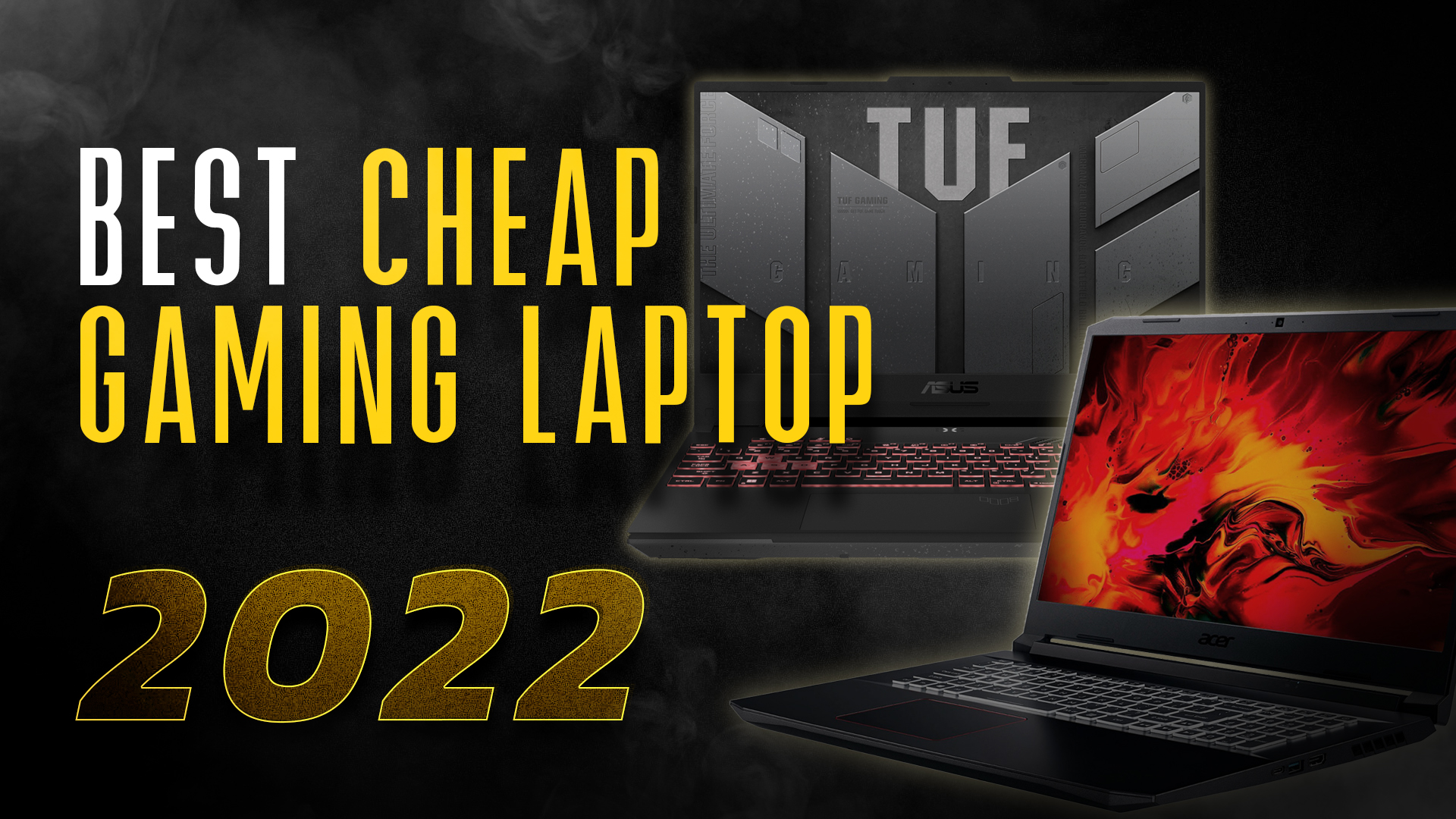 Searching for the best cheap gaming laptops in 2022 can be a daunting task, but we’ve rounded up our top picks for gaming on the go, saving you all the hassle.

Buying a gaming laptop for some of the top games doesn’t always mean paying for a Razer Blade, or even some of the mid-range laptops we usually recommend.

However, you should consider a few things before going for the budget and even just a laptop in general. While your gaming laptop — especially the ones recommended in this article — will last longer than ever before, you can’t really upgrade.

Going the desktop route for gaming on a PC is almost always preferable, but ultimately not everyone has the space to house a desktop.

With this in mind, you should also keep in mind that the GPUs and CPUs inside, while close enough to the full-fat desktop variants, will always be a tad less powerful because they’ve been scaled down. Nvidia, Intel, and AMD have gotten better at this, but there’s cooling to worry about too. Many chips and devices, even on desktops, will slow down if they find it’s getting too hot.

However, with the recent advances in mobile gaming from companies like Nvidia and AMD, we have seen many improvements.

We’re aiming for under $1000 for every laptop on this list, be sure to check out our updated list of gaming laptop deals to find a bargain.

Ideal for esports, as well as for light 1080p gaming (essentially, set things to medium and work from there), this laptop is way above its weight class.

Combining an i5, 16GB of RAM (there is an 8GB version, but always go with a 16GB minimum) and an RTX 3050 Ti, it can handle pretty much many games from the past few years without much fuss.

You’ll hear us talk about laptops that will last a few years and that’s what we aim for when we recommend them. These laptops, while cheaper than the others on offer, require confidence that the next big game won’t run on them for some reason.

We’re confident that the 3050 Ti in the Acer Nitro 5, along with the rest of the specs, will be aided by supersampling, be it Nvidia’s DLSS or AMD’s FSR. This technology should stretch for miles what you can play on the go.

In recent tests on similar systems, with DLSS 2.0, we’ve seen the 3050 Ti get a massive boost, with up to six times the performance achieved during Time Spy’s intense benchmarks.

Although we gave it a mediocre rating, when you consider that the specs are quite similar, apart from using a last-generation AMD chip, we still managed to get a decent amount of performance out of the device. to fetch.

Estimates from 3D Mark saw the 1080p Ultra, without DLSS, achieve an average of 45FPS on GTAV and Battlefield V. Apex Legends saw potential for 75FPS.

Much of the review focused on the generic and mediocre hardware that encased the device, rather than the actual interior that left a deep impression on us.

If we can put a big asterisk on this, we recommend getting an extra piece of RAM with your order. The ASUS TUF A15 comes with this great spec, of DDR5 memory, the latest AMD 6000 chip, and an RTX 3050 Ti. However, it only comes with 8 GB DDR5 memory, which we do not advise you to rely on for too long.

While DDR5 is a lot faster than DDR4, and the 8GB should presumably still get you playing a lot of games, but you’ll always want a bit of overhead.

Aside from this one caveat, this laptop – like the other RTX 3050 Ti-compatible laptops – will pack a surprising amount of punch when gaming at 1080p. While you have to turn down some things here and there to get that 60FPS you want.

The A15’s modern specs and full integration with the new laptop technology from Nvidia and AMD to help with the best performance while gaming on the go should dominate much lower end games.

If you want a device that’s solely for gaming, we can’t recommend the Steam Deck enough. In our review, we said that working with SteamOS and some of its weird issues can be a problem for newbies, but if you use the huge community behind it, you’ll figure it out.

To be fair, the price for the performance it gives on some of the newest, AAA games, is astonishing for the price. Starting at just $399 and $649 for a 512GB version, it’s a no-brainer for the gaming enthusiast who just wants to be on the move all the time. Or in bed. Or on the toilet.

With production ramping up at Valve’s end, placing your order will ensure you receive yours by the end of the year.

If you click on a product link on this page, we may earn a small affiliate commission.