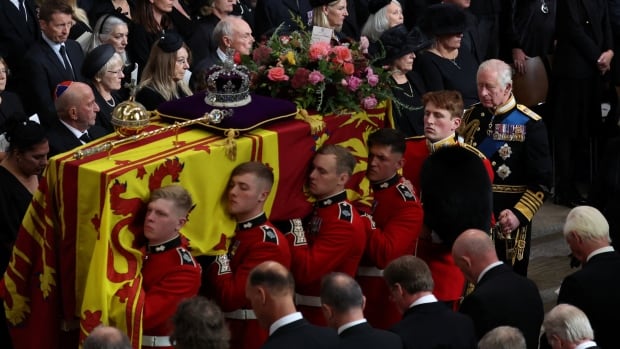 Music at Queen Elizabeth’s funeral included songs played during her wedding to Prince Philip and her coronation, as well as specially commissioned works by British composers, all of which paid tribute to her “remarkable reign,” according to a statement from Buckingham Palace. .

The choirs of Westminster Abbey and the Chapel Royal of St James’s Palace, organists, state trumpeters and the Queen’s Piper performed during the service.

The palace has not yet said which songs have been selected by the queen herself, but it did provide details about the special meaning behind some of them.

Before the service officially began, organists played as more than 2,000 dignitaries gathered at Westminster Abbey.

After porters with the Queen’s coffin arrived at the entrance to the abbey, the choir of Westminster Abbey began the Sentences — five lines of scripture set to music by two of the abbey’s deceased organists from the 1600s and 1700s.

The two choirs sang the last two Sentences together as the coffin was carried to the front of the abbey, followed by the royal family. The Sentences has been used at every British state funeral since the early 18th century, Buckingham Palace said.

After the Dean of Westminster delivered The Bidding, which included thanksgiving for the Queen’s “lifelong devotion to duty and devotion,” all those present at the Abbey sang the first hymn, The day you gave, Lord, has ended.

It was followed by a talk by Commonwealth Secretary-General Patricia Scotland. The choir sang Like the Hearta setting of Psalm 42 to music specially ordered for the funeral.

The music was written by British composer Judith Weir, who holds the title Master of the King’s Music – a role within the royal household in which she composes music at the request of the monarch. The song is inspired by Queen Elizabeth’s “unshakable Christian faith,” Buckingham Palace said.

British Prime Minister Liz Truss then gave a lecture, after which those present sang The Lord is my shepherda hymn that had special meaning for the Queen: it was sung during her marriage to Prince Philip in 1947.

After a sermon by the Archbishop of Canterbury, the choir sang My soul, there is a landset by Hubert Parry, who described the palace as “an anthem of great hope.”

After a series of prayers from other church leaders, the choir sang O taste and see how gracious the Lord iswhich was composed for Elizabeth’s coronation in 1953. It was followed by another hymn, Blaenwernwhich was sung by the audience.

The Archbishop of Canterbury then gave a eulogy, which was followed by another song especially dedicated to the funeral service. The song, Who will separate us?, sets words from Romans 8 to new music by Scottish composer James MacMillan. On Twitter, MacMillan said he was “deeply honored” to be invited to write the song.

I was very honored to be invited to write a new anthem ‘Who Shall Separate Us?’ for the funeral of Her Majesty Queen Elizabeth II. She was a constant presence in my life and an inspiration to countless millions around the world. https://t.co/opjUnumI6f

Just before the end of the funeral service, four trumpeters from the Household Cavalry of the British Army sounded The last message, which is often heard at military funerals or memorial services. It was followed by two minutes of silence before the trumpets sounded The Reveille, indicating that a service member is going above and beyond his mortal duties. (You can read more about it) The last message and Reveille, and their use in Canada, here.)

Those in attendance then sang the British national anthem, God protect the kingbefore the Sovereign’s Piper of the Royal Regiment of Scotland played a traditional bagpipe lament, Sleep sweetheart, sleep. The bagpiper usually has the unique role of playing outside the sovereign’s window for 15 minutes every morning to wake them up.

While an organist played, the coffin was carried from the abbey to begin the procession to the Queen’s final resting place in St George’s Chapel in Windsor Castle.